What Should CODOH Do?

As CODOH enters a new phase in its history, it is time to take stock. Because even for us at CODOH it is true that those who control the past, control the present, and those who control the present, control the future. So, first we, the team of Trustees and volunteers at CODOH, are trying to capitalize on the past—CODOH’s past. Some of us have been with CODOH for many years, others are rather new to the team. Bradley, of course, saw it all, but every human memory is finite, and when you’re part of a system that’s been operating for decades, it’s easy to lose the larger perspective on things.

I became aware of this while working on our project to get all old issues of Smith’s Report online. It’s a shame that this was not done years ago. And it’s not just about getting some old, yellowed newsletters posted. What is spelled out in those newsletters is the history of CODOH, of the Campus Project, of Bradley’s life’s work.

I realized that as I was going through one issue after the other (as I write this, I’m up to SR #40). I have to read them all, every single article, because when they are posted into the CODOH library, they each have to be put into their proper subject category, depending on what they are about. We have another volunteer who cleans up scannin errors and puts the proper HTML codes in place, but then it still needs fine-tuning and most of all, categorizing.

One thing I realized is that CODOH became really big when David Cole did his video on Auschwitz in 1993. This joint venture gave Bradley and his Campus Project a huge thrust into the public eye, into mainstream media. The ADL, the New York Times, Hillel, and, yes, Deborah Lipstadt, piled onto Bradley’s juggernaut, slowly but surely bringing his efforts to raise public awareness about Holocaust revisionism down to a slow crawl.

What I also realized is that Bradley’s initial success was met by the Dark Side of the Force with an unsurvivable barrage of counterpropaganda. Few may have been aware of CODOH, but undoubtedly many, many millions have been affected in the years and decades since by the massive propaganda effort to brainwash one upcoming generation after another into being unwilling to accept other views, and to condemn those questioning the West’s Central Taboo. 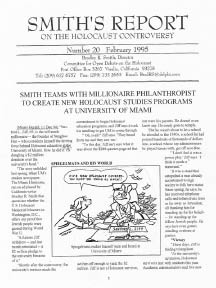 Here is the gist of it. In SR #20 Smith wrote about the effect his Campus Project’s ad campaign had at the University of Miami:

“So I scribble a text for a modest ad, back it with $288, then Ziff [Jewish magnate] sweetens the pot with a couple million and presto, five new Holocaust courses at UM that weren’t there before and a new Jewish folk hero. What’s the World Jewish Congress and the rest of that gang complaining about? It might never have happened without me!”

“You brilliantly turned defeat into a joke. From a historical perspective, and objectively and heartlessly, you should be lynched by revisionists. They returned your ad money to you, $288, and you generated $2,000,000 in research and educational funds for exterminationists. […] Instead, this ad will, for decades, create new exterminationists backed by the Ziff millions.”

What if that reader is right? What if the bickering we revisionists do has merely served the Holocaust Industry as a pretext to rev up its propaganda and fundraising machines, merely making it and the Jewish lobby grow faster and bigger? What if we merely help the beast to get more powerful and more dangerous? What if every little success we have is outdone by the Lobby a thousand-fold, turning success into defeat?

If that were so, shouldn’t we stop doing what we have been doing the past 25 years? Would that amount to saying, “Okay, you win,” and we then roll over and play (and are) dead?

But it may be time to sit back and think things over.

Fact is that we are involved in a propaganda war. We may score a few points here and there, but realistically speaking we are so ridiculously outgunned—each of our dollars is met with a million of theirs—that the question really arises: should we even try to do propaganda?

I’m sawing on the branch CODOH is sitting on, no doubt. But maybe CODOH should move to another branch. Or are we just in the same spot where Bradley has been for the past 25 years? He was running CODOH in a way that made the media pay attention—usually in a very negative way, but ”there’s no such thing as bad press.” Creating tempests in the media teapot in turn made Bradley’s work look important and impactful to his supporters and the “movement” in general—that is: to you, dear reader. It made his support money flow. It has kept the butter on his bread for the past 25 years. So no matter what the impact—whether for better or for worse—he had to keep doing it.

That’s no longer the case, though. CODOH is now free of the need of having to feed a family. So let’s free our minds as well and take a deep, serious, long look at CODOH’s, even at revisionism’s, historical record. Let’s figure out what advanced the cause, what just made noise to no lasting good effect, and what actually even backfired, and then let’s try to learn a lesson from it all. That’s what history is for: to teach us (all) a lesson or two, which we then apply to the present in order to create a better future. Right?

So, should we keep trying to compete through the mass media, against the deep-pocket propaganda machinery of the Industry? Should we carry on email-bombing mostly hostile recipients, hoping for some Big Bang to get some publicity from?

Or should we change our focus to something more subtle, more long-term, more strategic in nature?

I’m not going to make any suggestions here. Even though I have my own opinion about it, I’d rather not divulge it just yet, because it might influence you. I prefer your uninfluenced opinion.

So please be so kind as to take the time to think it over and write us a note—or an essay—to [email protected] If you do not want it published in SR, please say so, but in case you think that’s OK, please indicate if we may credit you by name.

Whatever the outcome, we, the CODOH team, are ready to press the reset button, reboot the system from the bottom up, and make a fresh start.

One thing I can already say now, though: in-fighting does NOT work. That brings me to another topic which popped up repeatedly when going through old issues of SR. As some may remember, in 1993 a major conflict arose between the staff of the IHR and its founder Willis Carto. Bradley Smith and CODOH got drawn into that conflict, taking sides as Bradley saw fit back then. I have always tried to stay out of it and focus on producing quality work and cooperating with everyone I could productively work with. There may have been a legally Right and a Wrong in that conflict, but there has also always been a morally Right and Wrong, and looking back at the historical record of both sides involved, those Rights and Wrongs aren’t necessarily the same.

Since we are currently posting all the individual articles which ever appeared in SR, those dealing with the Carto/IHR conflict are also among them. When I talked to Bradley about it a few weeks ago, he was convinced that not so much of it is to be found in SR. Well, that’s relative. It’s rather too much for my taste. It goes without saying that I feel very uncomfortable posting those vitriolic exchanges of the past. I’d prefer letting old wounds heal. Still, I do post it all, as we won’t censor our own stuff, but I introduce each of these items with an appropriate editorial comment.

Having said this, CODOH will cooperate with anyone who will work with us productively, and who can help the cause of furthering free speech where it’s most threatened. In this case, we are willing to cooperate with both The Barnes Review (a Willis Carto creation) and the Institute for Historical Review.

We all need to start looking forward, not backward, and make the most of what we have.