What Would You Say? What Will You Write?

They’re in jail(s), for saying they (don’t) believe things you also probably (don’t) believe, whether and wherever you might (or might not) say so. They are in Germany, but they might as well be in any of dozens of other countries that would punish them similarly, or worse, for saying what they said, and what you believe, or at least (illegally) question. Even if you don’t quite see everything their way, they’re in jail for speech.

We who believe in freedom of speech need to support them. Yes, by all means, send them money, however that might be done to or for detainees in the “justice” system of that “democracy.” But something I can tell you pretty well how to do is to write them, in English, German, or other European languages. It’s done (only) by means of an ancient, government-operated system probably not that familiar to our younger acolytes, called “snail mail” to distinguish it from e-mail, the means by which most of us now send and receive most of our written communications other than smart-phone text messages. 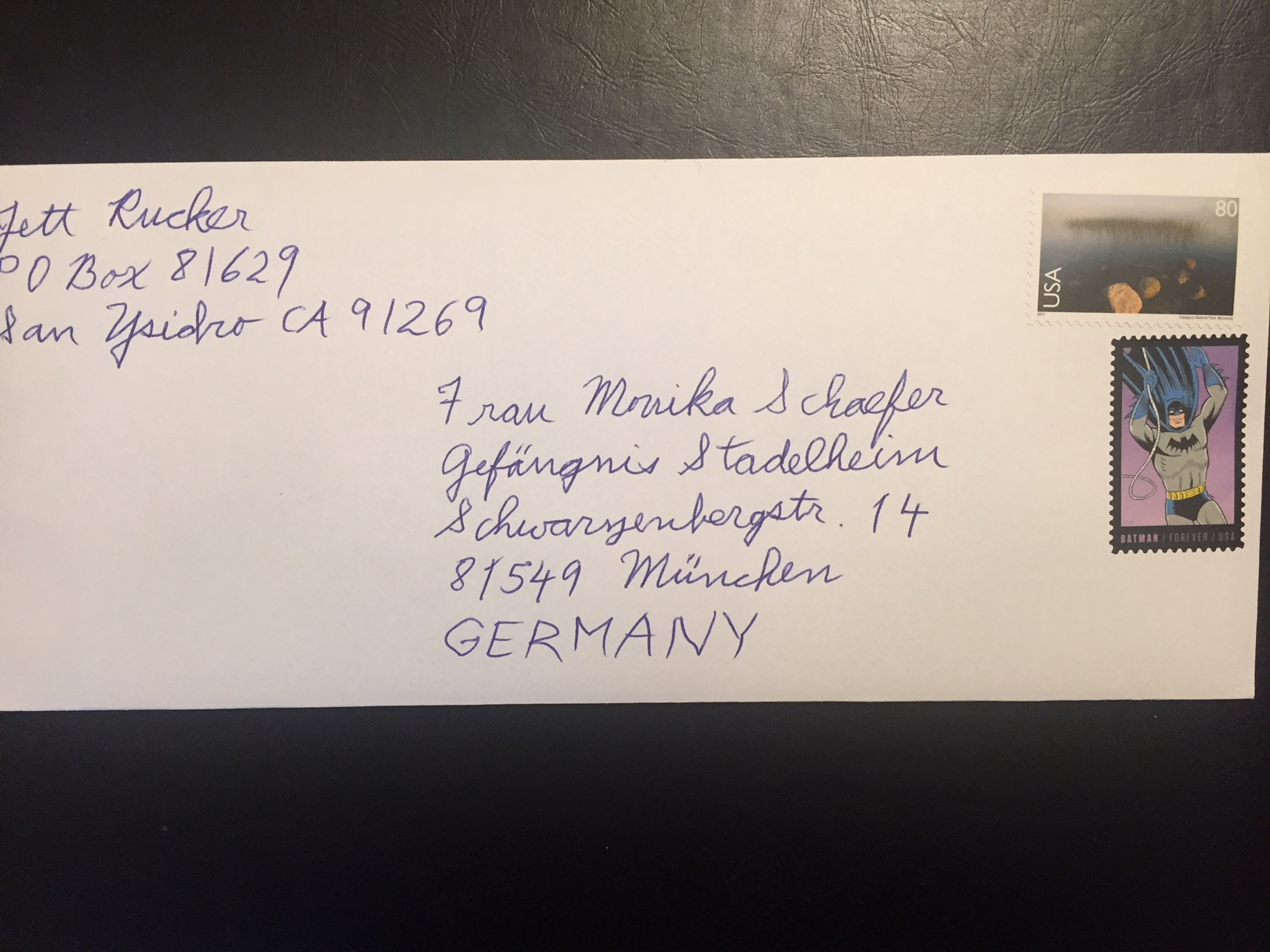 You’ve got to hie your butt down to a post office (or visit USPS.com, if you’re willing to give them your credit-card number) and purchase stamps, those things one affixes to paper envelopes so as to get them delivered by said postal systems. The good news: nowadays, unlike in our parents’ day, you don’t have to lick them; they’re self-adhesive—peel ‘n’ stick. Get $1.15 stamps, at least one for each letter you mean to send.

For people living in the USA, I’m going to walk you through this step-by-step; it is not easy. First, get that envelope (I knew you didn’t have any; they’re available in peel ‘n’ stick versions, too, at your local drugstore or supermarket) and a pen with which to write the address by hand (or print this message out and cut the address out of the message to tape onto the envelope). Be sure GERMANY is by itself, on the last line in SOLID CAPS, and affix the $1.15 stamp in the upper right corner of the envelope. Finally, weighty as your thoughts and hopes might be, keep the combined weight of the paper you write said thoughts on and that envelope under 1 ounce (28.3 grams), seal it and … find a mail box to put it into. Or go back to that post office and insert your missive into whatever appears to be the best slot (it might say International).

I told you it wasn’t easy, not even for us oldsters who are used to doing these things (we actually grew up this way—explains a lot, doesn’t it?). That one-ounce thing: one 8½ x 11 sheet of copy paper will keep you well under that one-ounce limit; if you use two, weigh the damn thing. You’ve got a scale for small amounts of … stuff; it’s good for this purpose, too. If it comes in over 1 ounce, suck it up and put one MORE stamp on; after all this effort, it’s easily worth it. You want our heroes to know all your thoughts, don’t you?

Now, what to say? It might not even matter that much, but here’s what I wrote her six months ago, when she was first thrown in the dungeon:

I’m a US citizen living in the US. I consider it monstrous that Germany has a Holocaust-denial law under which you have recently been arrested and detained.

I hope for your early release, exoneration, and repeal of the odious laws under which you have been persecuted.

Just what I’ll follow this up with, after (her) six months in the dungeon … it’ll be interesting to see, at least for me. But I’ve got a bunch of those stamps. And the persecution of our champions increases every day. The postal service will sell you as many of those stamps as you care to pay for …

Write to Monika Schaefer at the following address:

Write to Ursula Haverbeck at the following address:

Write to Gerd Ittner at the following address: