William B. Lindsey – a good friend of the Institute for Historical Review and a member since 1983 of this Journal’s Editorial Advisory Committee – died on February 4. 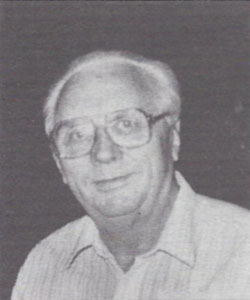 A native of Texas, Bill earned a bachelor of science degree from the University of Texas, and a doctorate in chemistry from Indiana University (Bloomington). He worked for 33 years as a research chemist for the Dupont corporation.

As a professional chemist with a keen interest in Second World War history, he was particularly curious about the

claims of wartime mass killings of Jews in “gas chambers” at Auschwitz-Birkenau using hydrogen cyanide gas from Zyklon B, a commercial insecticide and pesticide. Consequently, he conducted several inspection visits of the sites in Poland of alleged wartime “extermination camps,” including Auschwitz, Auschwitz-Birkenau and Majdanek.

In February 1985 he testified in the “Holocaust trial” in Toronto of German-Canadian publisher Ernst Zündel. Lindsey was recognized by the court as a expert witness on hydrogen cyanide. Based on a careful on-site examination of the “gas chambers” at Auschwitz, Birkenau and Majdanek, and on his years of experience, he declared under oath:

After looking over the evidence … I’ve been forced to conclude it is impossible for it to have happened the way it’s been described. … There are too many inconsistencies. … I have come to the conclusion that no one was willfully or purposefully killed with Zyklon B in this manner. I consider it absolutely impossible.

For a man of Lindsey’s standing and background, making such a statement in public took considerable courage, especially in 1985. (Since then, acknowledged specialists in several different countries have authoritatively validated his pioneering testimony. See, for example, the Winter 1992–93 Journal, esp. pages 427–428.)

A steadfast friend of the IHR, he addressed the Fifth IHR Conference in 1983 on “Zyklon B, Auschwitz, and the Trial of Dr. Bruno Tesch.” (His presentation was published in the Fall 1983 Journal, and is also available on audiotape from the IHR.)

In the years since his retirement in 1985, he and his wife Tessy made their home in Camp Hill, Pennsylvania. Several of us who counted this generous, intelligent and unassuming man as a good friend were glad to see him again last October at the Eleventh IHR conference. We were very saddened to learn, just a few weeks later, that he had leukemia, and could not expect to live much longer.

Bill is survived by his wife, their two sons, Michael and Robert Lindsey, and one grandson.