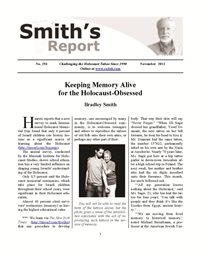 The latest issue of Smith’s Report (no. 194, Nov. 2012) is now available for free online viewing. Bradley Smith's lead article reports on how those obsessed with wallowing in Holocaust "memory" try to keep that delusion alive and pass it down to the next generations. Jett Rucker picks up the topic of Holocaust obsession in his paper, where he describes himself as being obsessed with the Holocaust, although quite differently than the "survivors" and their kin, and he discusses what repercussions the Jewish Holocaust obsession – or tunnel view – has in the world.

Other articles in this issue of Smith’s Report include an exchange on the CODOH forum about "The Negro Soldier" during the Third Reich fighting for Germany, a delicious exposé by Paul Grubach of Deborah Lipstadt's double standard when it comes to genocide denial – she and her ilk condemn it when it's about their tribe, but embrace it when it's about others – and a paper by Robert Faurisson about the most recent events of his persecution in France and why that won't stop revisionism from prevail. In addition and as always, this issue of Smith’s Report contains a number of updates and comments about current events.

And then Smith must add yet another note, with apologies: CODOH.com has been down almost all of October into early November, caused by technical difficulties of our overloaded dedicated server. CODOH's dedicated team of volunteers has been working overtime to resolve this. On the one hand, they were successful, as you can see when visiting the site, which now loads fast and without annoying error messages. On the other hand, our information services and donation page being inaccessible was potentially very bad for contributions. It has been. Very bad again, and this only after Smith had been knocked out himself due to sickness for most of the summer. Smith and his volunteers, who have put in some 20,000 unpaid hours (yes, twenty thousand) into getting new CODOH up and running over the past two years, are on their own. Not quite. They have the visitors of CODOH.com and the readers of Smith’s Report. They urge you to contribute. They would plead, making note of their dire financial situation in the moment, but understand that would appear unseemly. They will only note that the moment is urgent. And they are very grateful for your understanding and for your kind and hopefully generous consideration.