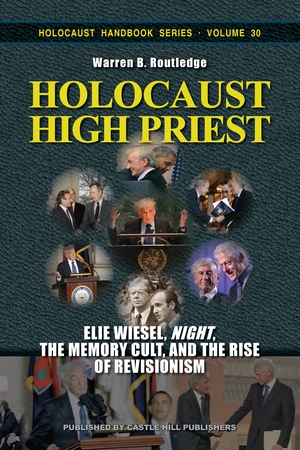 Castle Hill Publishers proudly announce the publication of the first ever unauthorized biography of Elie Wiesel. It shines the light of truth on this mythomaniac who helped transforming the word "Holocaust" into a brand name:

Elie Wiesel, Night, the Memory Cult, and the Rise of Revisionism

By Warren B. Routledge
@ www.HolocaustHighPriest.com

We are proud to announce a new book: Prof. Dr. Warren B. Routledge's Holocaust High Priest: Elie Wiesel, Night, the Memory Cult, and the Rise of Revisionism, with a foreword by Germar Rudolf. The world's first unauthorized biography of Elie Wiesel shines the light of truth on this mythomaniac who has transformed the word “Holocaust” into the brand name of the world’s greatest hoax. Here, both Wiesel’s personal deceits and the whole myth of “the six million” are laid bare for the reader’s perusal. It shows how Zionist control of the U.S. Government as well as the nation’s media and academic apparatus has allowed Wiesel and his fellow extremists to force a string of U.S. presidents to genuflect before this imposter as symbolic acts of subordination to World Jewry, while simultaneously forcing U.S. school children to submit to Holocaust brainwashing by their teachers…
Read more...