"My Revolutionary Life" by Leon Degrelle 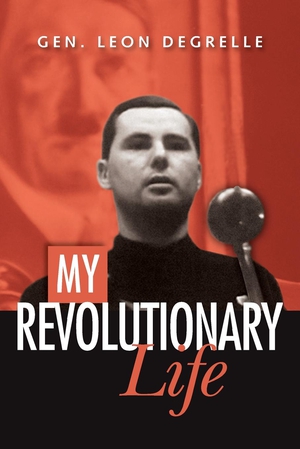 The late Belgian Waffen-SS general Léon Degrelle did not live to finish his autobiography, but The Barnes Review managed to reconstruct it using the documentation and partial manuscript Degrelle left behind. So here it is:

Here is Gen. Leon Degrelle's autobiographical account of his daring escape from war-ravaged Germany in 1945 and his adventures after the war. Sentenced to death by firing squad in absentia by the Belgian government after the war, Degrelle lived in Spain for over 50 years after flying his way across Europe and crash-landing near an Atlantic beach, barely surviving. Degrelle's My Revolutionary Life has never appeared in print as a book before. In it, the great Belgian Waffen-SS officer recounts his experiences as a rising nationalist politician, the political situation in Europe before World War II, his battle against the bloody Bolsheviks—not only before, but also during WWII—the last days of the Third Reich, and his daring escape to Spain (with a huge price on his head), where he was given asylum by Gen. Francisco Franco. Painstakingly reconstructed from Degrelle's private lectures, this book is Degrelle at his very best: his amazing memory for detail, his exciting style and story-telling ability, his eyewitness insights into history—this book has it all. Once you start reading, you will not be able to put it down!