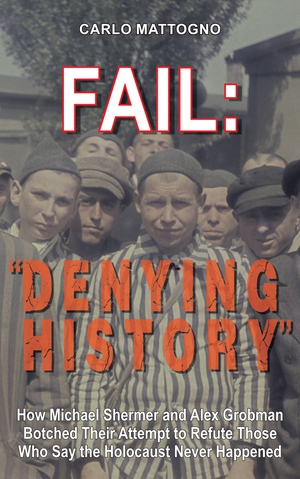 Michael Shermer, a professor for the history of science, has crossed intellectual swords with revisionists since 1994, when he dedicated the major part of an issue of his Skeptic Magazine to discussing, “Who Says the Holocaust Never Happened? And Why Do They Say It?,” the issue’s subtitle, which is also the subtitle of the book Denying History that is the topic of the present study. In the context of that article, Shermer appeared on U.S. TV (the Phil Donahue Show), where he debated the two U.S. revisionists David Cole and Bradley Smith (youtu.be/VUjRIcgtz2Y). In 1995, Shermer participated in a panel discussion with Mark Weber at the Institute for Historical Review (youtu.be/4l8ZUVVB4z8). In 2009, Shermer issued a new "updated" edition of his book, which is still offered for sale on Amazon. We saw to it that people interested in that book also find Mattogno's rebuttal in their search results, now available as a separate book:

Skeptic Magazine editor Michael Shermer and Alex Grobman from the Simon Wiesenthal Center wrote a book in 2000 which they claim is “a thorough and thoughtful answer to all the claims of the Holocaust deniers.” In 2009, a new “updated” edition appeared with the same ambitious goal. In the meantime, revisionists had published some 10,000 pages of archival and forensic research results. Would their updated edition indeed answer all the revisionist claims?

Unfortunately, it’s yet another grand feint, and the present study proves it. In fact, Shermer and Grobman completely ignored the vast amount of recent scholarly studies published by revisionists.

In their book, they primarily piled up an enormous heap of falsifications, contortions, omissions, and fallacious interpretations of the evidence.

Finally, what the authors claim to have demolished is not historical revisionism but a ridiculous parody of it. They also massacred their own methodic rulebook by ignoring the known unreliability of their cherry-picked selection of evidence, utilizing unverified and incestuous sources, and obscuring the massive body of research and all the evidence that dooms their project to failure.

Caveat: This is a slightly updated version of a contribution already published in the book Auschwitz Lies.