"Lectures on the Holocaust": best revisionist book ever 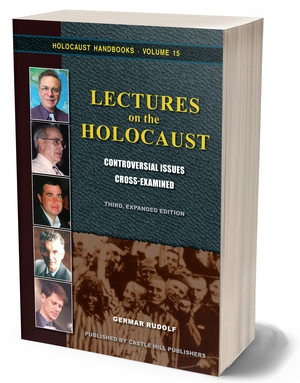 Castle Hill Publishers are proud to present the all-new, completely revised, most up-to-date and fully comprehensive coverage of the revisionist cause against the orthodox Holocaust narrative ever. 600 pages of cutting-edge revisionism written in a riveting style:

Lectures on the Holocaust

What? 600 pages of dense, mesmerizing information for just thirty bucks? We must be crazy!

Well, no, we just want to make the good news contained in it as affordable as possible.

This book first explains why "the Holocaust" is an important topic, and that it is well to keep an open mind about it. It then tells how many mainstream scholars expressed doubts and subsequently fell from grace. Next, the physical traces and documents about the various claimed crime scenes and murder weapons are discussed. After that, the reliability of witness testimony is examined. Finally, the author lobbies for a free exchange of ideas about this topic. This book gives the most-comprehensive and up-to-date overview of the critical research into the Holocaust. With its dialog style, it is pleasant to read, and it can even be used as an encyclopedic compendium. 3rd edition, 596 pages, 262 b&w illustrations, bibliography, index. Vol. #15 of the prestigious series Holocaust Handbooks.

Now, for most of you this is probably not exactly new information. So let me share with you some information that is not known. Below you can find the main features as well as average monthly sales figures of the first six months of 2017 for six books that all give an overview of the critique of the orthodox Holocaust narrative, that is to say, the revisionist take on things. They are listed by sales rank.

The top-ranking book is one of our few "bestsellers." These numbers are the reason why all revisionist operations are rightly called "shoestring operations." Those figures may go down by up to 60% for future periods, by the way, because Amazon, after years of carrying them and which used to make up some 60% of our sales, delisted all of these and many more of our books last March. But that's not why I am listing this here.

If, as claimed above, the book Lectures is the most up-to-date and fully comprehensive, and also pleasant-to-read revisionist book on the subject, then why does it rank lowest in that list? Well, for once, the current edition came out only in early July 2017, hence is not included in any sales statistics, and the previous edition was never included in "Books in Print" by the publisher (The Barnes Review), so it could only be purchased from them (and in the UK from CHP), and from no one else, and we don't have the publisher's sales figures. So the number is inaccurate. But the truth of the matter is that Lectures has always led a life in the shadow of books with more "prestigious" authors, such as Prof. Dr. Butz, Dr. Kollerstrom and Dr. Dalton, all of whom are or used to be at some point university teachers, and none of whom has ever suffered criminal prosecution. Rudolf, on the other hand, is a court-convicted "criminal," because he was twice sentenced in Germany for his writings during trials where any defense in the matter itself was prohibited and punishable by law. Due to these convictions, Rudolf's detractors don't hesitate to smear his name and malign his work, while the many years of incarceration have made it virtually impossible for Rudolf to properly promote and market his books.

It is particularly striking that Arthur Butz's magisterial Hoax, whose core text has never been revised or updated in any noticeable way and is therefore to a certain degree outdated, is the second-bestselling revisionist book. Even the book Dissecting, edited by Rudolf, yet co-authored by many other high-profile revisionists, sells better than Lectures, although Dissecting's latest edition is now 14 years old and thus also considerably out-of-date.

While it is understandable that many readers prefer a short read such as Dalton's 128-page introduction, or mid-size books such as Kollerstrom's 260- or Dalton's 330-page summaries to Rudolf's seemingly intimidating 600-page compendium - that intimidation fades away swiftly while reading it. Choosing a 500+ page book published 40 years ago over a brand-new, similarly sized book that is at the forefront of its field tells us how difficult it must be for most readers to decide where to find the best comprehensive presentation of the revisionist cause.

To cut to the chase, here is the best decision you can make when choosing a good book that will provide the most-recent in-depth information on the revision of the Holocaust narrative. This is the one book to read to be fully in the loop:

Find out more about Lectures...

It is just outstanding what CODOH and the Revisionists have done and are doing. Sadly the people wont ever know- or will they??