Truth Forever On the Scaffold

Truth forever on the scaffold, Wrong forever on the throne,—
Yet that scaffold sways the future, and, behind the dim unknown,
Standeth God within the shadow, keeping watch above his own. 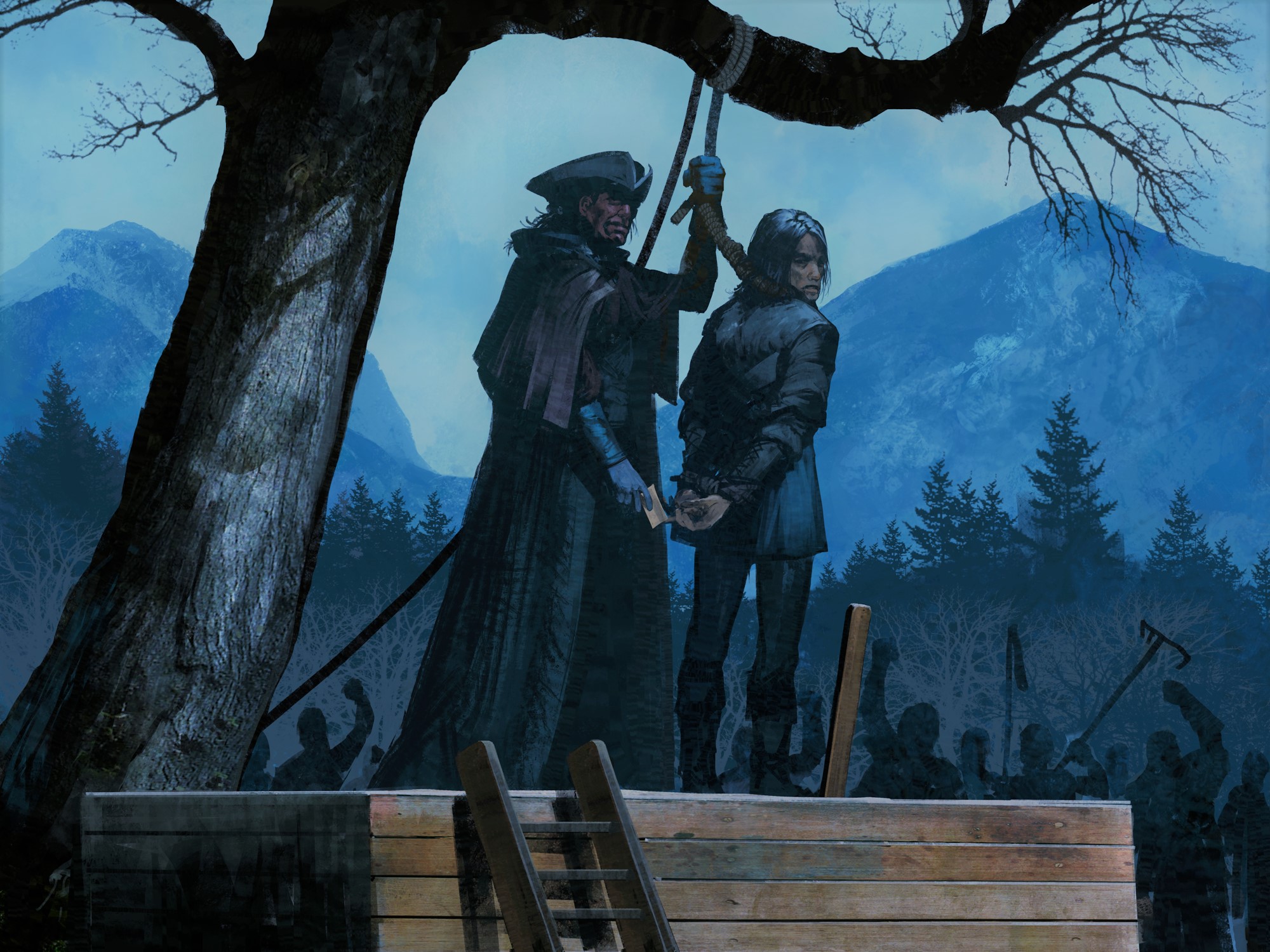 As most who read this are already doubtless aware, we launched a Free Speech merch store awhile back to help fund our ongoing labors in the trenches for the cause of truth and liberty.  There is quite a bit more to this endeavor than merely a means to create another revenue stream for CODOH, which we detailed in our article that we posted here announcing the merch store's launch. We emphasized from the very outset of this that our footing on this new site is precarious, due to the fact that Teespring, (now known as Spring) is unlikely to have our back in any way if anyone were ever astute enough to notice that our Free Speech merch venture, Castle Hill Outfitters, is actually an outreach effort of CODOH and try to get us kicked off of the site.  Indeed, it's even a bit of a question mark as to whether or not the owners of these sites would have a problem with our free speech-promoting products because we live in an age of such euphoric lunacy that even messages that should resonate with everyone from all walks of life, even people who lean liberal that were thoroughly acceptable and palatable to pretty much everyone as recently as a few years ago are now deemed offensive.  One simply never knows what people are going to take offense at anymore. SJW's have even started going after older TV shows that for their time were very subversive . . . because the propaganda in them isn't hard left enough for the latest woke talking points.

Though things are going fine (overall at least) with the merch store on Spring thus far, as of a few days prior to the publication of this article, we encountered our first major issue with the moderation staff there.  What ensued not only validated our trepidation but also conclusively demonstrated anew to us just how insanely off-the-rails society has gone, and how precarious the state of free speech is in the western world right now.

We made a new design for the store recently.  This one right here: 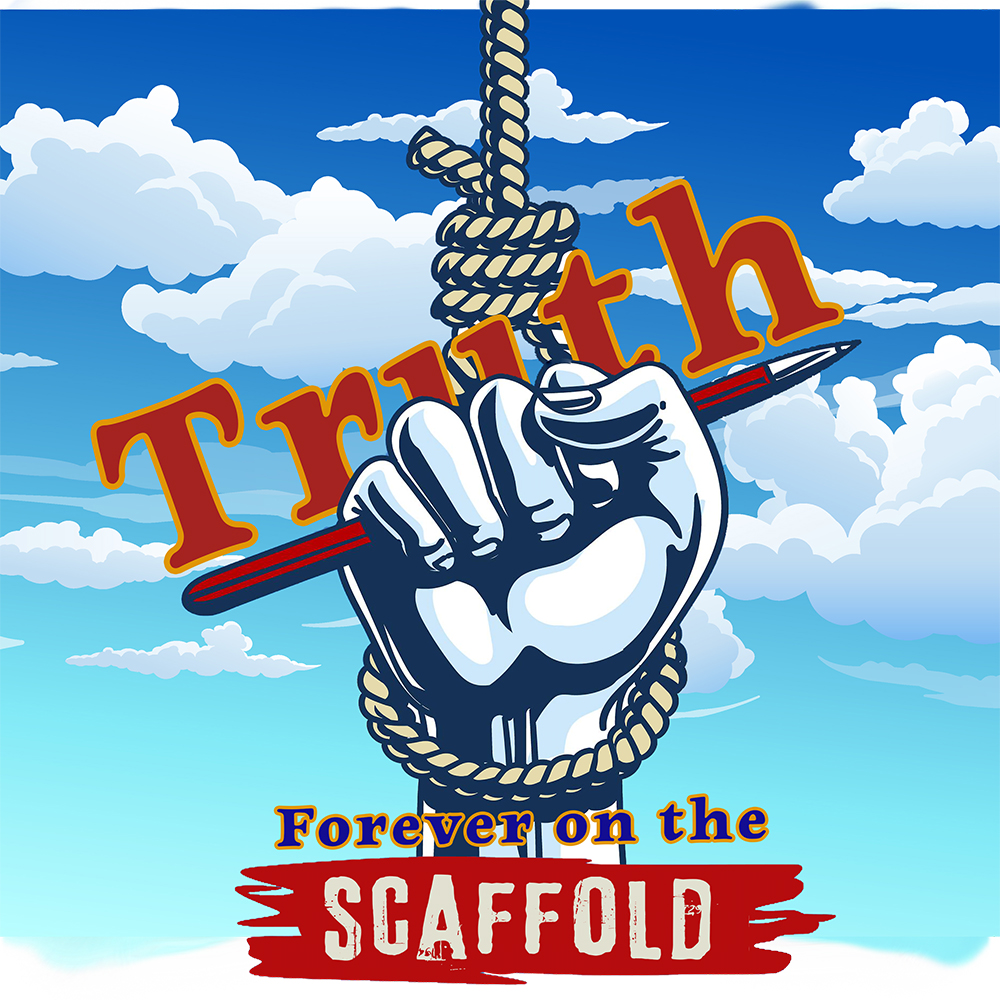 Even without knowing the history of the song and poem this graphic references, most would agree that the messaging for this is pretty straightforward.  The clenched fist holding a pen in the noose clearly symbolizes people who dare to tell the truth and defy the narrative . . . to "speak truth to power" to use a common modern expression.  It's clearly decrying and bemoaning the fact that those who tell the truth are often persecuted and even killed for daring to take a stand. It's a grim reality that all of us who question the status quo face — and the sort of thing that inspires defiance and resolution in people from all around the world.  What's more, the wording of the graphic is a direct quote from the poem "Once to Every Man and Nation" written by the famous preacher, James Russell Lowell.  Lowell wrote the poem to protest the Mexican-American war, but the words were later adapted into a hymn, which went on to become an anthem of the abolitionist movement and is still in circulation to this day.  As well it should be, given how sublime the poetry of the piece is combined with the timelessness of its message.

Listen to a performance of the song here:

The vivid and bright color scheme in the graphic contrasts with the grim imagery to convey not a sense of fatalism and defeat, but a spirit of defiance against tyranny and an unquenchable hope in the face of evil and impossible odds that every martyr for the cause of truth only makes the ultimate demise of tyrants all the more inevitable.  It's a powerful graphic and is purposed to not just look cool, but to resonate with anyone and everyone, regardless of their political persuasion.

But Spring would not allow us to post the graphic to our merch store.  Without any warning, or explanation the graphic was taken down. Again and again. After many hours of work and 8 or 9 attempts to add the graphic to our store, we tried contacting their customer support.  We were directed to their site moderators, who informed us that because the site does not allow content from creators that promotes or glorifies violence, they cannot allow the graphic to be shared.  Why?  Because there is a noose in the graphic.  Yep, that's right folks.  This is where we're at.  Never mind all the people who were hung to death or strangled before being burned at the stake for distributing Bibles in English, or for decrying the abuses of a tyrant King long before the KKK was even formed.  Never mind that it's objectively idiotic and infantile to assert that the mere inclusion of an image of something that has been used to end another person's life is "promoting and/or glorifying violence."  Never mind that the graphic's imagery is a direct reference to an old hymn that became famous as an anthem of abolitionists.  Forget all of that.  It's got a noose in it, so it's against the site's policies, according to the moderators who after quoting the site's policy about content promoting or glorifying violence simply ignored the subsequent emails we sent assuring them that we not only respect but agree with that policy while maintaining that our graphic doesn't even remotely violate it.

We'd been pleasantly surprised that after being on the platform for a few months now, we didn't seem to be having any problems with them.  But with this new development, it's pretty obvious that moving forward, our days there are probably numbered.  That anti-censorship-themed messages are now against the dogmas of political correctness is a pretty resounding indicator of how precarious the state of free speech in the western world is in general.  It only underscores why it's so crucial that we do not allow the relative amounts of freedom we still enjoy compared to the people of a place like Red China to lull us into a sense of complacency about the status quo.  This is a warning shot across the bow, friends.  In principle if nothing else.  Maybe the people working as moderators at Spring are just reactionary idiots without so much as an iota of common sense—and this is not an indicator of the company looking for excuses to censor us.  But stupidity is as much a menace to our liberties as outright malevolence.  It's an indicator, regardless of the actual intentions of the staff and owners of the site, of the state of mind that the people of the west are in.  A state of mind that compels them to think AND act as though the capacity of a person to be offended far outweighs the sacrosanct rights of freedom of expression and association.  And even trumps things like historical context and the objective definition of a thing.

If we get banned from Spring, we will have other options.  It won't be the utter end of this endeavor.  But it reminds us anew of the clear and present danger that not just CODOH, but all who dare to tell the truth and shame the devil are in so long as this current political climate persists.

So what can you do?  Simple, really.  Please don't take this or any of our efforts for granted.  If you struggle to be enthused about posts from us that are making a sales pitch to you, we understand . . . we really do.  But do YOU understand?  Do you realize what goes into an operation like CODOH?  What the costs of the site, the hosting, paying the staff, publishing the books and creating a steady stream of engaging, engrossing, and level-headed content for a candid world are?  Have you really thought much lately about why what we do is so important?  We're not asking of anyone that they do any more than what they can, when they can.  And that's one of the reasons why we even launched a merch store.  Not everyone can afford to buy new books or DVD's all the time.  But everyone can use things with utility.  But when we see that even though there has been some response to our more recent endeavors (for which we are very grateful) that compared to the actual size of our audience, the reception has been underwhelming, we can't help but wonder about the state of mind of our audience as well.

We're not saying we're going to win with t-shirts.  But small efforts add up to big rewards.   We can do with thousands what the forces of evil need tens or hundreds of millions of dollars to do.
Every dollar counts.  Every conversation you have with a normie counts.   You may not think it, but everything you THINK counts.

Do you want to know how we're going to prevail?  The same way that every other understaffed, overworked and impossibly out-numbered and out-gunned group of freedom fighters ever won anything.  By persevering. Inch by inch and mile by mile.  Your contributions to our efforts are the lifeblood of this body of resistance to evil that we are all a part of.  We stand together or not at all.

It's fitting that what prompted this post was a graphic referencing "Once to Every Man and Nation."  The words of that poem/lyrics of that song, are as sublime and poetic a note to end on as any we could ever hope for.

Thank you for reading, and for your support.  We couldn't do what we do without you.  We shall persevere.  We shall prevail.