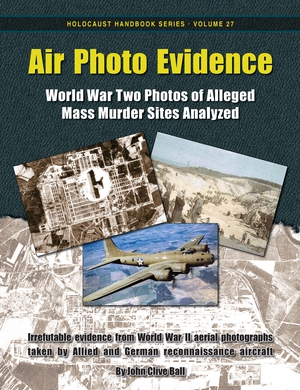 When John Ball's Air Photo Evidence appeared in 1992, it changed the field of Holocaust research forever. "Nothing is hidden from air photos," as Ball put it aptly – neither the crimes of the Germans nor the lies of the victors, so to say. Already in 2003 John Ball started working with Castle Hill Publishers on a new, corrected and expanded edition. After the last copies of the first edition had been sold in late 2014, we sat down and worked hard on this new edition, which features several more air photos discovered since 1992 plus a number of additional sub-chapters covering aspects of the Auschwitz camp system neglected or misinterpreted in the first edition. The book was edited by German Rudolf, who also wrote a foreword, and peer-reviewed by Carlo Mattogno, who helped updating and correcting the book where needed and also contributed a separate article. And here it is:

During World War Two both German and Allied reconnaissance aircraft took countless air photos of places of tactical and strategic interest in Europe. These photos are prime evidence for the investigation of the Holocaust. Air photos of locations like Auschwitz, Majdanek, Treblinka, Babi Yar etc. permit an insight into what did or did not happen there. This then can be compared with what witnesses claim happened there. The present book is full of air photo reproductions and schematic drawings explaining them. According to the author, these images refute many of the atrocity claims made by witnesses in connection with events in the German sphere of influence.

Witnesses have claimed that, in the spring and summer 1944, the chimneys of the four crematories at Auschwitz-Birkenau were constantly smoking profusely and that thousands were incinerated on pyres in huge outdoor pits. The air photos presented here show whether they are right. An analysis of these photos further reveals that someone tampered with copies of them in an attempt to add into the pictures what should be there but isn’t ...

After German units captured the Ukrainian capital Kiev, they are said to have shot some 33,000 Jews and tossed them into the Babi Yar ravine. In the summer of 1943, shortly before their retreat, the Germans are said to have exhumed the bodies and burned them for weeks on huge stakes. What do air photos from before and immediately after the event show?

Witnesses claim that in these camps altogether more than 1.5 million Jews were killed and initially buried in gargantuan mass graves. Later on they are said to have been disinterred and burned on huge pyres. Do the air photos show any evidence for this to be true, like remnants of huge mass graves, charred earth from huge fires?

This was the first major German concentration camp “liberated” by the Red Army toward the end of World War II. Initially it was claimed that up to 1.7 million inmates were killed here by various means, but that number has decreased over the past seven decades to just under 80,000. Also decreased is the number of officially alleged gas chambers used for these claimed murders: from seven to currently two. The air photos presented here give some clues as to why these mass murder claims have been untenable from the start.

3rd, corrected and expanded edition with contributions by Germar Rudolf and Carlo Mattogno.

This volume will not appear in a Kindle edition, because the many large-size images with properly positioned captions and explanations cannot be rendered in formats legible on mobile devices.