B. Kulaszka's Book on the Second Zündel Trial Back in Print 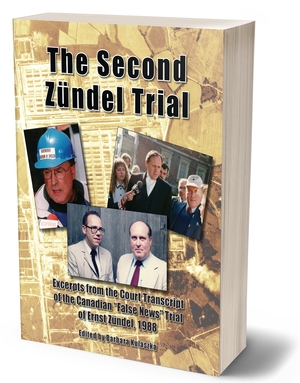 Back in 2017, Amazon banned a wide range of revisionist books from its Amazon.com, ~.co.uk, ~.de, ~.es, ~.fr etc. book-selling websites. Among them was also a book that had been out of print for decades and was only rarely (and expensively) available as used copies, if at all: Barbara Kulaszka's epic tome on the second Zündel Trial of 1988 titled "Did Six Million Really Die?". We have had a (slightly incomplete) PDF version posted on our VHO websites for some 20 years, and now we've decided to put it back in print, lest the book censors prevail! Hence, a book not available when Amazon banned it is now alive and kicking again, exactly because they banned it. Right back in their faces!

(We are also working on getting the transcript of the first Zündel Trial out as a book, but that will take us several months to complete. So stay tuned...)