Banana Republic: Germany, Country under the Rule of Law? 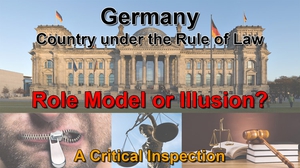 The Federal Republic of Germany enjoys the reputation of being a liberal, democratic country under the rule of law. This self-portrait will not be simply adopted here, however, but it will be critically reviewed...The litmus test for a country under the rule of law is when the state's interests collide with those of its citizens, that is to say, when the state finds it expedient to prosecute and punish its citizens(...) In this regard, however, Germany performs abominably, because its Code of Criminal Procedure gives judges all the instruments needed to deal with defendants which ever way they (or their masters) please.

View this new documentary on the German Code of Criminal Procedure: