"Debating the Holocaust" -- A New Edition 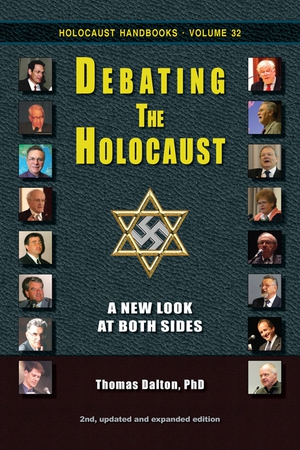 In 2009, CHP's imprint Theses & Dissertations Press managed to publish the philo-revisionist book Debating the Holocaust: A New Look at Both Sides written by a professor teaching at a US university. To protect his career, this professor chose the pen name Dr. Thomas Dalton. He has since written a number of revisionist papers, and in 2010 even helped updating Rudolf's encyclopedic Lectures on the Holocaust.

Now Castle Hill Publishers proudly announces that Dalton's book has been thoroughly updated and published in an expanded second edition as part of our prestigious series Holocaust Handbooks:

A New Look at Both Sides

For the past few decades there has been raging a kind of subterranean debate, one of monumental importance. It is a debate about the Holocaust – not whether or not it "happened" (this is a meaningless claim), but rather, how it happened, through what means, and to what extent. On the one hand we have the traditional, orthodox view: the six million Jewish casualties, the gas chambers, the cremation ovens and mass graves. On the other hand there is a small, renegade band of writers and researchers who refuse to accept large parts of this story. These revisionists, as they call themselves, present counter-evidence and ask tough questions. Among the issues they raise are these:

The revisionists arrive at a different account. Hitler, they say, wanted to expel the Jews, not kill them. The ghettos and concentration camps served primarily for ethnic cleansing and forced labor, not mass murder. The Zyklon gas chambers did in fact exist, but were used for delousing and sanitary purposes. And most important, the Jewish death toll was much lower than commonly assumed – on the order of 500,000.

In this book, for the FIRST TIME EVER, the reader can now judge for himself. Arguments and counter-arguments for both sides are presented, and all relevant facts are laid out in a clear and concise manner. The entire debate is presented in a scholarly and non-polemical fashion. Citations are marked, and facts are checked. READ, and JUDGE FOR YOURSELF.