Dresden Holocaust 1945: An apology to Germany is due 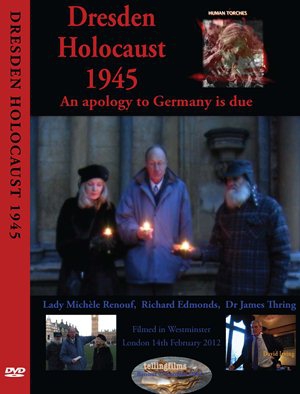 As Queen Elizabeth II opens a memorial to the 55,000 members of the Royal Air Force Bomber Command who died during the Second World War, increasing numbers of Britons are questioning the history and legacy of that conflict.

The political leaders (principally Prime Minister Winston Churchill) who sent those men of Bomber Command to their deaths – as well as condemning 500,000 German civilians to be burned alive across sixty towns and cities that were devastated in a deliberate bombing strategy – are now seen by some as war criminals.

Moreover the influence of these criminal policies can be seen in the approach of today’s Washington-London-Jerusalem axis, with American and British bombers again sent into foreign skies to terrorize civilians, in pursuit of an alien agenda that does nothing to enhance the security of the USA or the UK.

Telling Films has produced a new DVD which calls the criminal politicians to account and sets the record straight. In the process the film celebrates the small but significant group of influential Britons who even during the Second World War condemned the terror bombing policy.

Entitled Dresden Holocaust 1945: An Apology to Germany is due, the new Telling Films DVD combines archive material and footage from the 1940s; new film of a Dresden anniversary commemoration outside the Houses of Parliament and Westminster Abbey; and commentary from veteran political activist Richard Edmonds, peace campaigner Dr James Thring and documentary producer and free debate defender Lady Michèle Renouf.

Chapter Two of the DVD is Richard Stokes:Socialist Patriot, Opponent of Terror Bombing and Defender of Palestine: an address given in London by political analyst and broadcaster Peter Rushton, assistant editor of Heritage and Destiny. Mr Rushton sets Stokes’s courageous statements opposing the Churchill government’s bombing campaign in the context of his religious and political views, including attempts at a negotiated peace in 1939-40 and Stokes’s involvement in the notorious Tyler Kent affair, when an American cypher clerk was imprisoned for threatening to disclose Winston Churchill’s secret communications with President Roosevelt.