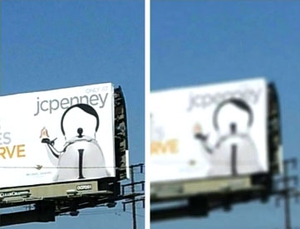 American retailer J.C. Penney's has taken down a billboard advertising a tea kettle and pulled a tea kettle from its shelves all because of an alleged resemblance to Adolf Hitler. The J.C. Penney billboard located east of the 405 freeway in Culver City, California. A passerby noticed the resemblance and posted pictures on the internet.

Jeffrey Cooper, the Democratic mayor of Culver City, remains upset at JCPenney for not initially noticing the resemblance. "I am disappointed J.C. Penney actually put the billboard up in the first place and more outraged that they actually attempted to defend it," he says in an email. "As a Jew, I am offended, [and] as an elected official, I am mad that the city I represent is linked to this."

The Anti-Defamation League weighed in, declaring "J.C. Penney did the right thing by responding to public concerns and removing the tea pot from their product line," "We take J.C. Penney at their word that any resemblance to the Nazi dictator was completely unintended." (http://www.hollywoodreporter.com/news/hitler-tea-kettles-sell-as-560698; see also http://www.huffingtonpost.com/2013/05/29/jc-penney-hitler-disappears-online_n_3351960.html)

On eBay, the now disgraced tea kettles are selling at 5 times their original price.

So, is this parody or paranoia? CODOH isn't sure, but during all the hubbub around this tea kettle, we have seen nobody crack a smile about it, and since pulling an item from the shelves after having advertised it in vain for good money is serious business creating a considerable loss for J.C. Penny, it may safely be assumed that this ridiculously irrational reaction is based on a deep-rooted paranoia, which in turn is an indicator to what degree this nation has been brainwashed by Holocaust propaganda.