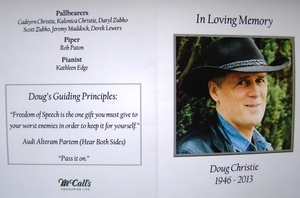 Stand for Liberty, because Douglas believed that Civil Rights and Freedom have a meaning.

Douglas H. Christie was born in Winnipeg on April 24, 1946. He graduated with a double major in political science and philosophy from the University of Winnipeg in 1967.

Over the years of his career as a lawyer, Douglas H. Christie, a "pro bono publico" spirit, developed a deeply passionate interest in the freedom of expression and in civil liberties in general, and as Canada's most prolific defender of free speech he appeared in the Supreme Court of Canada for this kind of issues more often than any other counsel in Canada to date.

On March 11, 2013, he passed away far too early, succumbing ot metastatic liver cancer. The funeral mass was held in in Victoria, B.C., at St. Andrews Cathedral, 10 a.m., Friday, March 15th, with private interment.

Until his death he continued advising clients around the world on publication and free speech issues. Two and a half weeks before he died, he was struggling to finish a jury trial, fighting pain and nausea, but true to his aim, he still wanted to finish the trial to the best of his abilities. He deeply regretted that at the end he had to leave his clients unrepresented due to his illness and death.

Even though we are not with all of you, our thoughts, prayers and works are and always will be.

"There is an ancient custom here in Canada: It is called public stoning and has its roots in the Middle East. These days it is carried out in the media (CBC) and singles out any individual that disagrees with what is 'politically correct.' Doug Christie was prepared to help anyone in the stone pit. One of a kind."—Helge Nome

"To think what is true, to sense what is beautiful and to want what is good, hereby the spirit finds the purpose of a life in reason.""—Sylvia Stolz