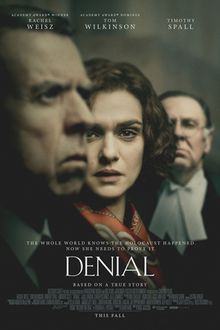 Full-page ads promoting Rachel Weisz in an orange "mop wig" and a coveted appearance on the New York Times "Times Talk Show" could not keep Denial from sputtering toward box-office failure (defined as failing to gross more in the first six months than the cost of production.)

Gala opening-night events in five US cities raised a first weekend total of $93,728 according to Boxofficemojo.com. but by Thursday, the take had shriveled to a meager $7,942 in nightly box-office receipts. This in New York, L.A., Chicago, Boston, Miami, cities with populations that are much more interested in Holocaust propaganda than most.

As a comparison, another fictional movie, Miss Peregrine's Home for Peculiar Children, netted $15,000,000.

The production costs of Denial have not been released.