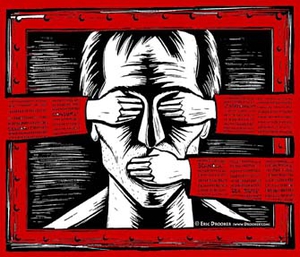 The German government's censorship authority "Bundesprüfstelle für jugendgefährdende Medien" (BPjM) has moved to put the German edition of the book Sobibor. Holocaust Propaganda and Reality on the list of banned books.

In a letter dated July 19, 2012, the publishers of this book were informed that the German Federal Office for the Protection of the Constitution had suggested ten days earlier to include this book on the list of banned media for the following reason:

"In it, the authors of the book deny the mass murder of Jews in the extermination camp Sobibór during World War II, but also the Holocaust in general. The book is therefore capable to potentially disorient adolescents socio-ethically."

Although the publishers or authors have a right to argue against such a listing and to appeal to a court of law, arguing with German authorites on revisionist books would be a perfect waste of time and money. As a counter measure, Castle Hill Publishers have instead given CODOH the permission to post the entire book as a free download online, which is the first time if can be had as a pdf, contrary to what the German authorites claim (so far only a shorter, unedited pre-publication typescript version has been elsewhere available online).

So here it is, with links both for free downloading and for ordering a hard copy: Sobibor. Holocaust-Propaganda und Wirklichkeit