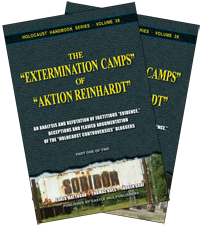 This lengthy orthodox critique has forced the criticized revisionist authors to get back to the drawing board. Finally, after 20 months of arduous work by both the authors and the peer reviewers and editors involved, the results has finally been released to the public also in a printed version comprising almost 1400 pages in two tomes!

This work has occupied the most knowledgeable revisionists for a year and more. It has led to the postponement of numerous other projects, including a number of other books of the Holocaust Handbooks series slated for publication. Today's leading revisionists consider this their ultimate response and final word on the subject. (And we all should hope so, because what would be next: a study comprising 5,000 pages?)

This definitive revisionist work on the alleged extermination camps of the so-called "Aktion Reinhardt" reveals in hundreds of cases that the Holocaust Controversies bloggers have plagiarized many sources and that many, if not most of their factual claims are mere conjectures, distortions, falsifications, hypocrisies, lies, misrepresentations, unfounded speculations, and blatant omissions of facts.

You can read more about this book here at CODOH, you can buy a hard copy from our shop here, – AND you can download this gargantuan work there as well – for free, of course, as usual.