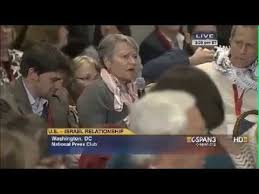 This video comes from the March 7, 2014 National Summit to Reassess the US-Israel Special Relationship. The teaching of the Holocaust in American schools is questioned by one participant who fairly classifies the Holocaust as a religious belief and its teaching as the violation of laicism at the public school system.

Correction: An earlier version of this article erroneously reported that this exchange occurred during a meeting of the American Israel Public Affairs Committee (AIPAC), which was in fact not involved in the meeting shown in the video.