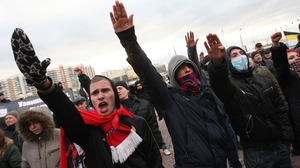 The Russian lower house has received a new bill suggesting up to five years in prison for publicly denying the Holocaust (see http://rt.com/politics/denial-holocaust-criminalize-moves-russia-853/).

Typically the law and the media reports conflate historic discussion with "inciting hatred or humiliation of human dignity" – just look at the image (right) used to illustrate this news item in the Russian media. What does historical discussion have to do with provocative postures of rambunctious youngsters?

The sponsor of the new censorship bill is Boris Shpigel (Spiegel, pronounce Shpigle, is German for mirror), who was leader of a group called ”World without Nazism.” Shpigel styles himself as a defender of "rights." Sure... throw historians in jail for not agreeing with your views of history. Shpigel has reacted to criticism of his advocacy of "correctional labor" for errant historians by.... guess what? Yes, calling anyone an "anti-Semite" who doesn't agree with him. Scouring mountains of negative comments, Shpigel did find a few comments that were either ugly or too pro-Palestinian. For example a sign stating "Stop the Palestine Holocaust" was allegedly proof of an "Anti-Jewish protest." (See http://www.jewishpress.com/news/russian-bill-on-holocaust-denial-prompts-anti-jew-feedbacks/2013/03/28/

Shpigel's seems to have a very restricted view of free speech... granting it only to his own views.

CODOH says: Let Shpigel look into a mirror to see the ugly face of bigotry and censorship. Defend free speech!