Memorabilia : David Cole in Auschwitz: The Video of the Century. 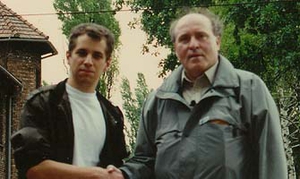 A young Jewish holocaust revisionist, posing as a believer, puts some hard questions to the senior curator of the Auschwitz State Museum. After making this video, a "hit" was put out on Cole, and a reward for information on his whereabouts was issued by Irv Rubin (who years later, was arrested by the FBI for planning to kill a Lebanese-American Congressman.) Fearing assassination, Cole went into hiding. He resurfaced in 2014, after his girldfriend blew the whistle on his second identity David Stein.