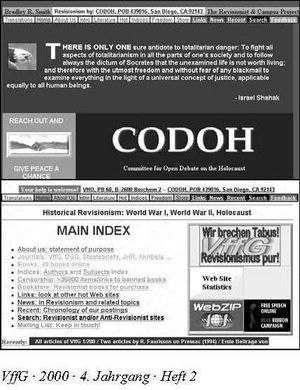 The image to the right was taken out of no. 2, vol. 4 (June 2000) of the now defunct German revisionist periodical Vierteljahreshefte für freie Geschichtsforschung (Quarterly Journal for Free Historical Research). It announced a close cooperation between the two largest revisionist websites www.CODOH.com and www.vho.org. This cooperation went so far that, in 2003, www.CODOH.com basically closed down, since www.vho.org had included almost the entire CODOH contents.

But then disaster struck in late 2005 with the deportation from the U.S. and long-term incarceration in Germany of Germar Rudolf, who at that time was the sole proprietor of Castle Hill Publishers (CHP), which was and still is the owner of www.vho.org. Although CHP was subsequently taken over by a group of British idealists, the company’s activities decreased drastically in subsequent years. Today, the website www.vho.org is static, and only a very few new books are being published independently by CHP every year. CODOH, on the other hand, revived their website, and in 2010 decided to vigorously revitalize it by giving it a major overhaul. Now, www.CODOH.com, equipped with a modern database framework, is in the process of incorporating the contents of www.vho.org after carefully screening, revising and reformatting it.

Considering all this, CODOH and CHP have now come to an agreement to merge not only their respective websites’ contents. As a matter of fact, they will become one entity. So don’t be surprised if, starting sometime next year, you are trying to go to www.vho.org and end up at www.CODOH.com. Since it’s simply impossible for the small revisionist community to maintain two large independent database-driven web archives, it makes perfect sense to merge them. Although CODOH will keep the domain name vho.org, it will cease to lead to a separate website.

In addition, the British bilingual book outlet Castle Hill Publishers (CHP), once the revisionist power house driven by Germar Rudolf, but ever since his arrest in 2005 a somewhat neglected orphan, will also be brought into the folds of CODOH as their book and video outlet. Already now you will notice that CHP’s online bookstore at https://vho.org/shop has a different header, combining the logos of both companies. The same header is also included at the top of this very email. Those ordering from CHP will see similar changes in CHP’s stationery starting with the next billing cycle. In the meantime, our volunteers are busily programming a new, cutting-edge webshop that should also come online earlier next year as part of the CODOH website. It will maintain most, if not all, of the items currently offered by the CHP online shop and will then strive to expand it’s range of items.

Although CODOH is a U.S.-American company, CHP is based in the UK. Whether CHP will ever be relocated to the U.S. remains to be seen. For now it makes perfect sense to keep it where it is, as it gives CODOH access to the European market, whereas the U.S. market is so strongly occupied by both the IHR and, to a much larger extend, The Barnes Review, when it comes to publishing and selling revisionist books and videos, that it makes no sense at all for CODOH to compete with them in that market.

We employees and volunteers from CODOH and Castle Hill Publishers are looking forward to this new and exciting development, and we are sure that our loyal visitors, customers and supporters will benefit greatly from this as well.