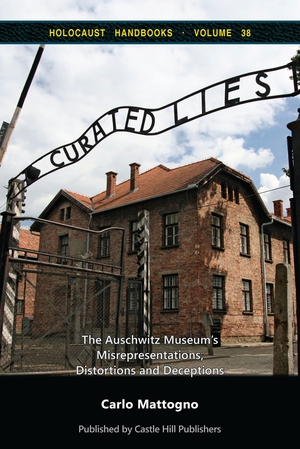 CODOH and Castle Hill Publishers proudly announce the publication of a new member of our prestigious series Holocaust Handbooks:

Since the early 1990s, revisionist historians have published an increasing amount of research about the infamous German facility at Ausch­witz in what is now Poland. This research surpasses the work of the Auschwitz Museum’s own research department in both quantity and quality while failing to find in the tens of thousands of available wartime documents any trace of plans for gas chambers for executing people at Auschwitz or any of its satellite camps.

Because these facts contradict a great body of the history of World War II, Polish researchers at the Auschwitz Museum have been under enormous pressure to respond to this revisionist challenge. In 2014, the museum researchers issued a book, The Beginnings of the Extermination of Jews in KL Auschwitz in the Light of the Source Materials, reprinting 74 original German wartime documents which they claim prove the construction and use of homicidal gas chambers at Auschwitz by the German government and the German civilian and military forces who ran the camp. However, upon examination of the book, none of the “new” evidence or analysis holds water. In its main section, Curated Lies is therefore a point by point refutation of the Auschwitz Museum’s book. This main section is preceded by a section focusing on the Auschwitz Museum’s most coveted asset: the alleged gas chamber inside the Old Crematorium, toured every year by well over a million visitors. We begin Curated Lies therefore by exposing the many ways in which visitors have been deceived and misled by forgeries and misrepresentations committed by the Auschwitz Museum, some of which are maintained to this day.