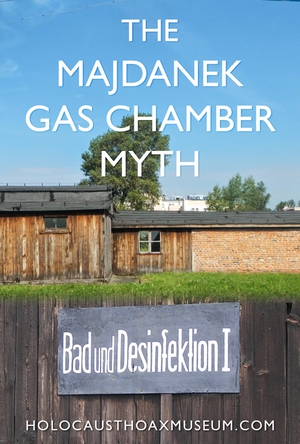 Majdanek was the first major concentration camp liberated by the victorious Allies. Upon capture by the Soviet Union, original propaganda claimed that 2 million were murdered in a “factory of death” which included seven homicidal gas chambers.

However, Majdanek was captured largely intact and a large amount of documentation and physical evidence helps to acquit the Germans of the “Gas Chambers disguised as shower rooms” blood libel.

The Majdanek Gas Chamber Myth demolishes the Holocaust exterminationist “Gas Chambers Disguised as Shower Rooms” propaganda hoax and shows how Majdanek is a microcosm of the larger Holocaust Hoax.

Watch The Majdanek Gas Chamber Myth, a new documentary from the filmmaker of The Last Days Of The Big Lie and The Treblinka Archaeology Hoax

Free yourself from a lifetime of brainwashing about “Six Million” Jews “gassed” in “Gas Chambers Disguised as Shower Rooms.”