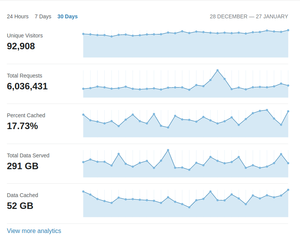 Some of you may have noticed that during the past two days our main website www.codoh.com was at times unreachable, as our server kept throwing a "502: Bad Gateway" error. We are still looking into what the cause of it is. Since it started happening on January 27, the world's Holocaust Memorial Day, we suspected some evil machinations by the traditional enemies of free speech, but so far we could not confirm this.

During our investigation of the cause for this behavior, we also checked our traffic stats, and look what we found for the 31 days between December 28, 2019 and January 27, 2020:

Just a bit over Six Million accessed documents!!! How is that for our performance during the 75th anniversary of the Auschwitz Camp's occupation – and, no, it was NOT a liberation, because the Red Army, by definition, did not liberate anyone anywhere! Fact is that the mere amount of traffic may cause trouble for our server, and we may be in need of some upgrade.

As to our normal business, we have been working over the past three months on releasing a German translation of Thomas Dalton's Debating the Holocaust – titled Die Holocaust-Debatte – which we switched free a few hours ago (and will advertise shortly with a separate email to our German-language newsletter list). In the process of preparing this translation, we implemented numerous updates and improvements, which we also incorporated in a new, fourth English edition of that book, available as of today: