The Old Testament: A Fountain of Fairy Tales 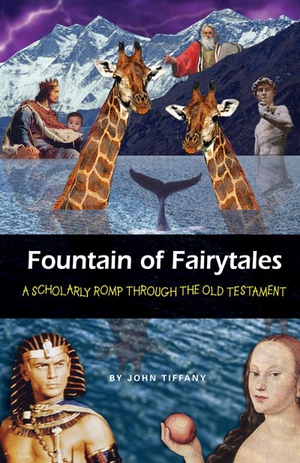 Castle Hill Publishers are proud to announce the availability from its UK outlet (plus a list of other outlets in the UK and the U.S.) of a new book on the Old Testament:

A Scholarly Romp Through the Old Testament

By John Tiffany and Paul Angel

The Old Testament is one of the most amazing collections of stories ever assembled in the history of man. Many say they know it is the divine word of God. Others say it is a collection of valuable parables with no basis in historical fact. Others have made a living off of proving that the Old Testament is a factual and accurate history of early man. So what's the truth? In Fountain of Fairytales author John Tiffany takes us on a whirlwind tour of the Old Testament, telling us which stories are pure balderdash—unsustainable through historic examination—and which may have some basis in real archeology and authentic history. And also which tales seem to have been borrowed from other primary cultural sources including the Egyptians. If you want proof the entire Bible is a faithful transcription of the word of God —straight from mouth to Jewish scribe's pen—read no further, for this book is more of a light-hearted yet scholarly tour of the Old Testament, not a dense religio-historical treatise. Revealed: Men like Thomas Jefferson and Thomas Paine actually advocated removing the Old Testament from the Christian Bible. Why did they consider the Old Testament unworthy of inclusion? But there's more... The modern-day concept of "Judeo-Christianity" is solidified by the inclusion of the Old Testament in the Christian Bible. But how and when did this melding occur and who was lobbying for the Old Testament to be made a part of permanent Christian theology, forever linking the two very different religions? Some of the topics covered include: Did the Egyptians suffer the 10 plagues? Did the ancient Israelite subjugation of Palestine ever really take place? Is there any evidence that a man named Moses led his people out of bondage? Were there other antecedents to the Ark of the Covenant? What evidence exists to prove the existence of a vast Jewish empire under kings named David and Solomon? Did David fight Goliath? Why would he cut his head off? Could Noah's Ark have floated? How many commandments were there originally? How much of the Old Testament is borrowed from other cultures? Etc. In addition, the Old Testament contains many confounding stories you may never have heard about in Sunday school, like the yarn in 1 Samuel 24 about David watching Saul defecate in a cave, or "righteous" Lot offering his daughters to a gang of rapists. Obviously, somewhere along the line, a few things have gotten a little mixed up—perhaps an error or two in translation—or maybe the inclusion of these tales tells us something very revealing about the various Old Testament authors. If you're ready for a tour of the Old Testament like none other, get a copy of Fountain of Fairytales.