The Rape of Germany after World War II 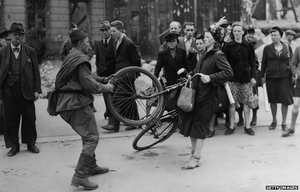 The one side of the history that hardly ever get to the public. A harsh look at what happened to Germans after WWII.

This was indeed a tragedy. But it was meant to send a message. Don't ever attack the Russians again or suffer the consequences.

POOR GERMANY THEY NEVER PAID MY NATIVE POLAND FOR DESTRUCTION OF MY COUNTRY, WARSAW ETC. DISGUSTING.

Over 70 years have passed since the end of the War of 1914-1945. In connection with all aspects of that War we all have the Right to Know! "THE TRUTH! THE WHOLE TRUTH! AND NOTHING BUT THE TRUTH!" The TRUTH will out in the end regardless as to what the "Powers" that be want! It would be in the interest of all concerned that it should take place without prejudice,in an atmosphere of free and peaceful conditions.

Agatha, you overlook something: Germany paid reparations to Poland by handing over a quarter of its prosperous territories for the Polish people to keep. So if we were to balance things off, Poland got out of WWII winning big time!

A C Grayling and Christopher Hitchens debated the "morality" of the Allied firebombing of Germany at the Goethe Center in Washington, DC. The director of Goethe who introduced Grayling & Hitch said, his head and voice downcast, "We Germans have no right to complain" about the war crimes committed against Germans. I disagree, and am also appalled and outraged at such a statement. But things got worse: Grayling, a (self-styled) ethicist who teaches philosophy in his native Britain, declared that, "Yes, it was immoral to firebomb Germany, but it would have been more immoral to have failed to defeat the Nazis." What puzzles me, and I would have thought would have caused consternation for an "ethicist," is that no firm definition of "Nazism" was offered, and no analysis of a just cause for war against "Nazism" was established. In an essay in 2015, Robert Cohen wrote that "most schoolchildren believe that FDR and Churchill went to war against Hitler because of what was happening to the Jews." But in 1939, when the British declared war on Germany, and in 1941, when the US engaged in the war, nothing extraordinary was "happening to the Jews." So what WAS the beef between Churchill, FDR and the Nazis? That question must be answered in order to complete the analysis of the "morality of firebombing."

finametrics, that's a confusing response. It's morally repugnant, for one thing. For another thing, to rape women on a mass scale in retaliation for a military engagement seems to me a sign of craven cowardice. Why not vent your rage on fellow warriors, rather than unarmed civilians? As well, the Americans were eager to defeat Bolshevism -- Wilson sent troops to destroy Bolsheviks in 1918. According to British historian Jeremy Black, the "Cold War" -- war against Russian Communism/Bolshevism -- began in 1917 and did not end until 1989. Churchill essentially declared 'war' on Bolshevik/Communist Russia in 1946. In 1989 Communist Russia was defeated by the allied forces of USA and UK. Will Russia "send a message" to the Americans and the British; commit brutal rapes against their women and girls and rampage through their lands to teach them to "not ever attack the Russians again or suffer the consequences?" No, that won't happen. 1. Germany was weak, destroyed, spent when Russians brutalized German civilians. US and UK today are not weak, and they are not next door, they are protected by distance. 2. Russia today is a different place and culture than Bolshevik Russia. It seems to me that if the Russian people TODAY wish to be understood and perceived as fundamentally different from the brutal Bolsheviks who were the object of 70+years of war by Western powers, then they should foreswear the brutality of the Bolshevik era. Maybe even apologize for it.

My grandparents owned and operated a small bed & breakfast outside of GNESEN, a German town east of POSEN. After World War I, this entire area was GIVEN to the Polish Government. Germans living there could no longer speak German, they closed the schools, and the ones that refused to leave were heavily taxed. My grandmother moved to this country with my mother & uncle in 1934 after my grandfather died young. The German High Command under Hitler NEVER invaded Polen...they invaded former German territories freeing thousands of German citizens from the impositions placed on them by the Polish Government (including ruthless murder of German civilians). This was backed by 98% of the German population. Tens of thousands of German citizens were freed because of Hitler and welcomed the victorious Wehrmacht. RUSSIA invaded the remaining 3/5ths of the Polish country and caused most of the atrocities and destruction. History books refuse to tell the WHOLE TRUTH. My family knows different because they were there!!!!

Ackermann: I know the truth hurts, but what you are saying isn't the total truth either. The history of Poland is a choppy one, with no stable borders and no defined ethnic settlement area either. In the late 18th century, Poland, home to Poles, Germans, Lithuanians, Slovaks, Russians and Ukrainians, got divided up between Russia, Austria and Prussia. While many areas along Poland's borders were inhabited by majorities of non-Polish ethnicities, "core Poland," if you which, had a Polish majority. During the Napoleonic occupation, Poland got reestablished as a French satellite state for a few years, but that got reverted after the Napoleonic Wars, when Germany, Russia and Austria again parceled out Polish lands. During World War I, Germany reestablished Poland, this time as a German satellite monarchy, in what used to be the Russian part of occupied Poland, but they did not hand over a single square foot of what they occupied (mainly major parts of the Posen province). At the end of the First World War, Germany surrendered after all parties had accepted Wilson's 14 Points as a basis for peace negotiations promising self-determination to all -- although that was aiming only at ethnicities under German and Austrian Rule, but not at those under Russian, English, French, Italian and American rule in their empires, of course. Right at the end of WWI, Poland turned against their German masters and started insurgencies in border areas, leading to many years or armed conflict particularly in East Upper Silesia (fought on the German side by the so-called “Freicorps” volunteer militia). After WWI, and along Wilson's line of argument in his 14 Points, the Versailles Treaty called for referenda in border areas. East Upper Silesia got divided after such a referendum, not exactly along the results obtained, as they were more than 60% pro-German, but as a political-economic decision by the victorious Allies to weaken Germany by handing over to Poland large parts of the Silesian coal reserves and steel industries located there. Parts of East Prussia and West Prussia became a part of Germany after they had results of 95% and more for Germany. When similar results started turning up in the rest of West Prussia, Poland demanded that the referenda stop and that it gets free access to the Baltic Sea as promised by the Versailles Treaty. The Allies sided with them, creating the so-called Corridor, which was mainly the former Prussian province of West Prussia. This province -- down to the city of Bromberg -- was inhabited in its majority by ethnic Germans and also by Slavic people, many of whom did not consider themselves Polish but felt pro-German and voted accordingly when asked. The situation was different in the former Prussian province of Posen, though, where a German majority lived only in a few major towns and cities and in its western and northern areas along the border to West Prussia, Pommerania, Brandenburg and Silesia.

Parts of these areas therefore remained with Germany (the so-called "Grenzmark Posen-Westpreußen"). In 1921, Poland attacked Russia in an attempt to expand its territories eastward as well, and due to Russia being weakened by the Communist Revolution, the Poles got "lucky" and made a mortal enemy in the east. What followed until September 1939 was a Polish policy of ethnic pressure designed to put all non-Polish ethnicities under such persecutorial pressure that they flee. In particular millions of Germans and Jews (who the Polish authorities considered as hostile ethnicity) did exactly that: they left. This is where Ackermann is right. When Germany invaded Poland in 1939, they did so in order to stop the Polish policy of ethnic pressure, which in 1939 had escalated to a policy of at times violent ethnic cleansing. But Germany subsequently occupied also territories indubitably inhabited mainly or even exclusively by ethnic Poles. Now, had the Germans conducted referenda and kept the parts of those territories that voted pro-German, but releasing the rest of occupied Poland back to independence, that would have been wise. But that's not what happened. Germany subsequently annexed major parts of Poland that were mainly inhabited by Poles (the former provinces of Posen and West Prussia, generously expanded to the east, plus a new area south of East Prussia that had never been German), leaving the rest as a powerless satellite "state" called the "Generalgouvernement." The Soviet Union in turn basically re-occupied what Poland had annexed in 1921, only some major towns and cities as well as the western areas of which had a Polish majority, if that. Hence, even though Germany started the war in order to and by invading its own rightful territories occupied and oppressed by others, it went far beyond that. And such excesses usually backfire.

If what Begin says is how the jewish elite feel - every German being a murderer - perhaps the 80% Germanic portion of the US population should rethink its feelings towards the stolen land of Khazar-Israel.

Thank you very much for the historical clarification. Once my Grandmother arrived in the U.S., her contacts with remaining family members were minimal. But she received several letters from her very excited sister about the arrival of German troops and the warm reception that they received. Mobs of angry Poles had murdered several families in GNESEN, and it was a great relief to be saved from this fate. The war in the east was hard on our family. My uncle tried for years to make contact with German relatives who might have survived, but found none. In 1998 (with new technology), I located my one remaining cousin (born three weeks before me!) in a town outside of Dresden (OHORN). We are now best friends and visit each other at least once each year. THANKS again.