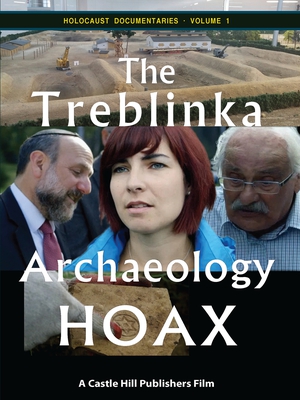 Finally Eric Hunt's stunning documentary on the alleged Treblinka extermination camp is also available on DVD! We offer it at the lowest possible price our on-demand manufacturer allows us, which means that we do not earn a single penny from sales, because we do not want to make any profit of it:

Currently available only in NTSC format (US DVD format), which won't play in European (PAL) DVD players! (We are working on a PAL release.)

Were 900,000 Jews “gassed” at Treblinka? Were 3.9 million Jews “steamed to death” in “steam chambers” there, too, as the Allied victors asserted right after World War II during the Nuremberg trials?

The current official “Holocaust” story is that Treblinka 2 is the largest mass burial site in the entire world, where the Germans gassed 900,000 Jews in 13 “gas chambers disguised as shower rooms.”

“Holocaust Revisionists” or “Holocaust Deniers” assert that there is no evidence to support this claim, and tales of “gas chambers disguised as shower rooms” are wartime atrocity fiction — similar to previously debunked claims about Jews being made into soap and lampshades.

Between 2012 and 2014, British Archaeologist Dr. Caroline Sturdy Colls conducted investigations on the grounds of the former Treblinka camp with the intention to refute the Deniers’ claims once and for all. The results of her studies were prominently featured by TV documentaries in both the UK and the US.

In The Treblinka Archaeology Hoax, US filmmaker Eric Hunt expertly analyzes Dr. Sturdy Colls’s investigations and exposes them as a massive fraud. For instance, her research actually included digging near clearly marked Christian graves claiming to find new “hidden mass graves”; she also falsely assigned homicidal intent to a normal life-saving bath and disinfection complex at the entrance to the Majdanek concentration camp, and misidentified a terracotta tile excavated at Treblinka as belonging to the floor of a homicidal “gas chamber.”

Free yourself from a lifetime of brainwashing about “Six Million” Jews “gassed” in “Gas Chambers Disguised as Shower Rooms” — watch this eye-opening documentary!

Most, if not all, European DVD players will play NTSC. The issue is different. It's to do with regions. Again most European (Region 2) players can play Region 1 (which includes the USA) discs but need a hack which can usually be found on line and is fairly simple to apply.