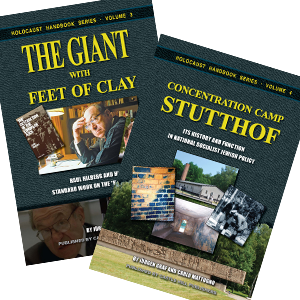 We are proud to announce the release of two new editions of two vintage books of our series Holocaust Handbooks (vols. 3 & 4). The old editions have been available only in the U.S. so far, but the new ones can now be ordered at reasonable delivery costs by customers residing either in the U.S. or in Europe:

The Giant with Feet of Clay

Raul Hilberg and his Standard Work on the ‘Holocaust’

This outstanding short study provides a merciless demolition of the central claims of the Holocaust thesis by way of a probing examination of Raul Hilberg's canonical The Extermination of the European Jews. By narrowing his focus to those pages in Extermination that deal directly with the plans, program, method, and numerical results of the alleged Nazi mass murder of the Jews, Swiss researcher Graf relentlessly exposes the weakness and, often, absurdity of the best evidence for the extermination program, the gas chambers, and anything like the six million death toll. Giant can be devastatingly funny in its deconstruction of Hilberg's flimsy attempts to portray mass gassing and cremation at Auschwitz and Treblinka; its focused brevity makes this book both an excellent introduction and a fine refresher course on the essentials of the revisionist case.

"It was Professor Arthur Butz in his Hoax of the Twentieth Century who proposed the image of the holocaust as a giant with feet of clay. By drawing on the analyses of revisionist historians and incisively pointing out inconsistencies in the documentary, physical and 'eyewitness' testimony, Jürgen Graf finds in the present study that, although the major portion of Raul Hilberg's bench-mark work rests on reliable sources, its title should have been The Persecution of the European Jews rather than The Destruction of the European Jews. Hilberg, by selecting an inaccurate title, has supported Professor Butz' notion that the Holocaust story has feet of clay." —Prof. Dr. Costa Zaverdinos, University of Natal, South Africa, rtd.

"A significant monograph from the indefatigable Jürgen Graf — and yet another contribution to the body of work at the center of holocaust revisionism. That he writes charmingly, too, is an additional dividend." —Andrew Gray, Copy Editor, The Barnes Review

"This book has great educational value provided it is studied rather than merely read. Some may wonder why Raul Hilberg's 40 year old work Destruction of the European Jews today merits a book length critique. The main reasons are that the 'Holocaust' legend has not changed very much in the interim, and that Hilberg presents the subject comprehensively, in a formal academic style that invites critical examination. Graf does likewise. If the reader will take the effort to examine the sources that Hilberg and Graf use, he will derive, first, a reliable presentation of how the 'Holocaust' allegedly transpired and, second, a perhaps shocking revelation of the shoddy evidence that the legend is based on and, third, a specific important application of a good part of the revisionist scholarship of the past quarter century. The reader will then understand the basis for the title chosen for this book." —Prof. Dr. Arthur R. Butz, Northwestern University, Evanston, Illinois

Its History and Function in National Socialist Jewish Policy

By Jürgen Graf and Carlo Mattogno

The National Socialist concentration camp of Stutthof, not far from Danzig (West Prussia), has never been the subject of scientific study by western historians. In Poland there exists quite an extensive body of literature on the subject, which must, however, be treated with caution, because it is heavily influenced by Soviet-Communist and Polish-nationalistic ideology. According to this literature, Stutthof became a 'makeshift' extermination camp within the framework of the execution of the so-called 'Final Solution of the Jewish Question' in 1944.

Jürgen Graf and Carlo Mattogno have subjected this view of Stutthof to critical examination based on Polish literature and documents located in Russian, Polish, and Dutch archives, paying particular attention to mass transports to and from Stutthof in 1944. This research led the authors to very definite conclusions as to the function of the camp, differing dramatically from those expressed in the standard literature: Not only do Graf and Mattogno prove that the Stutthof camp did not serve as a 'makeshift' extermination camp—the room claimed to have been used as a homicidal gas chamber was never anything else but a delousing chamber. This book also sheds some light on the question of what happened to prisoners who were sent to Auschwitz but were never registered in that camp: after quite an ordeal, some of them ended up in Stutthof.

The present volume, now in its third edition, is a milestone of research which no historian with any claim to seriousness can afford to ignore.