Some individual(s) have disseminated a flyer to local letter boxes of the Swiss town of of Kreuzlingen. It contests that Jews were systematically gassed during WW II. The real victims, the anonymous author states, are to be found amongst German civilians: "So-called contemporary witnesses of those years are claiming gruesome horror-stories. The vast majority of these claims do not withstand serious scrutiny." The deliberate extermination of the Jews was but a fairy tale. A systematic gassing of those people is claimed to have been impossible for "technical reasons". A number of revisionist websites and books (Stäglich's Auschwitz and Butz's Hoax) are quoted to shore up these claims. The flyer also contains serious errors, like calling Fred Leuchter a professor and claiming that Prof. Dr. Arthur R. Butz is a Jew. Its effect is moreover compromised by references to the Bible and to a Masonic conspiracy.

The local youth organization of Switzerland’s Socialist Party made the case public. "To deny the Holocaust is cowardly racist. We are going to fight this", said co-president Flavio Brühwiler. After a local Swiss citizen had brought the flyer to the Swiss police’s attention, they initiated a criminal investigation, because the contents of the flyer violate Switzerland’s anti-racism law. It is unknown how many of this primitive, type-written flyers have been distributed. (See image below). 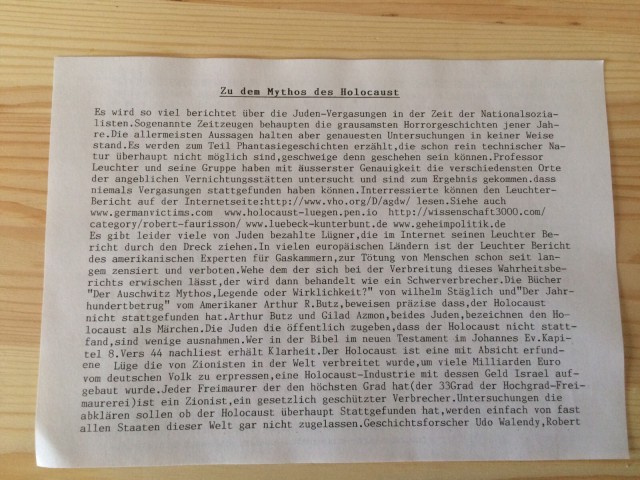