On February 23rd, 2017, the world's media started spreading the news that Israel's government-sponsored Yad Vashem Holocaust Memorial Center started putting Amazon under pressure to remove any and all material that questions the orthodox Holocaust narrative. Here is a list of items for your perusal:

Interesting in this context is the reference by Yad Vashem and the world's media that one reason to ask for this act of censorship was the recent "unfortunate change in climate with more-visible antisemitism" (Jerusalem Post, Feb. 23, 2017).

We at Castle Hill Publishers were holding our breaths. Amazon had been criticized by the media many times before for allowing the sale of controversial material on their website, but they never censored anything that was legal. So at first, nothing happened. But then, as if ordered to emphasize the urgency of Yad Vashem’s request, two Jewish cemeteries were vandalized, first one in Philadelphia (Feb. 27), then allegedly another one in New York (Mar. 3). The New York case, however, was later retracted: the tombstones there had fallen over decades due to age. Be that as it may, the cemetery stories added fuel to the fire in which Amazon's feet had been put.

Then, on the first workday of the week following the second (false) cemetery story, on March 6, 2017 at 6:39 pm, we received the following email from Amazon's EBook Subsidiary Amazon KDP, that is to say, Kindle:

We're contacting you regarding the following book:

[The following table contains in the left column the list of book titles as received from Amazon in the email quoted, with links leading to web pages with more information on the book and options to purchase it. The right-hand column contains the original Amazon ASIN of the Kindle book with a link to the Amazon page where it used to be sold.]

During our review process, we found that this content is in violation of our content guidelines. As a result, we cannot offer this book for sale. If we identify additional submissions with similar content that violates our guidelines you may lose access to optional KDP services and/or face account level actions up to and including termination.

To learn more about our content guidelines, please visit our Kindle Direct Publishing Help page at:

Note that none of the IDs given by them in the original email, which were removed here, are Amazon Kindle ASIN numbers or anything else we can identify. They have been replaced here with the proper ASINs. Also, the last two entries in the above list were not included in the original Amazon email list. Amazon Kindle sent us another email a day later with which they notified us that these two books had also been banned. The (canned) text of the email was otherwise identical, so we refrain from reproducing it here.

The following table contains links to a series of screenshots from our Amazon Kindle account showing that all these titles have been "blocked" since March 6 and 7, 2017, respectively:

Early in the morning of March 8th, we also checked the status of all the books we have in our account with CreateSpace, Amazon’s print-on-demand subsidiary. All were still listed and enrolled in all Amazon retail sales outlets. We had received no message whatsoever from CreateSpace, but when checking the U.S. and UK Amazon websites, the result was mindboggling. In the following table, the titles of the books (some abbreviated) have links leading to a website which lists online stores offering the book for sale. The links in the two right-hand columns go to the Amazon stores as indicated. Until March 5, 2017, these links all went smoothly to that book's dedicated sales page on Amazon.com and Amazon.co.uk. Since March 6, however, they all have been dead...

On March 11, however, CreateSpace sent us an email telling us that all the above books are indeed banned, adding four more to the initial list of 68, which are older editions that had been retired and had not been available anymore for quite a while. Here is their email's text:

[…all the above books, alphabetically sorted]

During the review process, your work was found to contain material, which may include cover image, title, product descriptions or interior content, that is in violation of CreateSpace content guidelines. As a result, this content has been suppressed through your account and removed from all sales channels. If we identify additional submissions with similar content that violates our guidelines you may lose access to optional CSP services and/or face account level actions up to and including termination. To learn more, please see our content guidelines at https://www.createspace.com/Help/Rights/ContentGuidelines.jsp Sincerely, The Content Validation Request Team [email protected]

If you look at the screenshots of our account with CreateSpace, it looks now like this, with most of our books being "suppressed" by Amazon:

In addition, if you search Amazon for bestselling revisionist authors, you receive the following (click on the link provided):

Repeat this with any other revisionist author or publication that comes to mind. The results are clear: Almost all revisionist content has been erased more or less from one day to the next. Hundreds of books and brochures gone as though they had never existed—unbooks, as George Orwell might have said. Anything left over by mistake might get deleted in days to come.

If we look at the list of banned books, we are astonished to find among them books which don't even deal with "the Holocaust" as such:

The first two deal with Jewish emigration from the Third Reich prior to the war. It is based on mainstream sources and does not touch upon the extermination issue. The third deals with Jewish fundraising campaigns during and after the FIRST World War, and therefore if only for chronological reason does not deal with the Jewish Holocaust of the SECOND World War. The last two books are highly esoteric studies of the organization, responsibilities and activities of the Central Construction Office at Auschwitz, which was in charge of building and maintaining the camp's infrastructure. It is based on original wartime archival material and does not deal with extermination claims of Auschwitz at all. The book has even been cited as a source by mainstream historians.

The sweeping mass ban enforced within hours, and the senseless aimlessness and random nature with which it was implemented, clearly show that these books were not pulled because their content was checked and found impermissible, but because someone (probably Yad Vashem) had sent them a list of items to ban, and Amazon simply complied by checking off all the items on that list.

And here is a Jewish newspaper gloating over this victory:

Stephen Oryszczuk, "Amazon removes Holocaust denial books from sale. Titles which question or reject the Holocaust have been taken off the site, following discussions with the Board of Deputies" Jewish News, March 8, 2017, 4:23 pm:

"Amazon UK has removed four books from sale which question or deny the Holocaust, following discussions with the Board of Deputies.

The titles, including 'Holocaust: The Greatest Lie Ever Told' and 'The Case against the Presumed Extermination of European Jewry,' [subtitle of Butz's Hoax. GR] were withdrawn from sale this week, despite it being legal to sell them in the UK.

Board of Deputies' vice-president Marie van der Zyl said: 'It is very welcome that Amazon has listened and removed the offending titles from their website. These are not works of historical integrity. They are an anti-Semitic attempt to exonerate the Nazis of their crimes and to stoke the fires of hatred.'

Amazon UK had earlier refused to pull them from sale, because there are no laws against Holocaust denial in the UK, unlike in other European countries like Germany and France.

After the apparent U-turn, Van der Zyl added: 'Should any member of the public find further offending works, please get in contact with us and we will report them using the appropriate channels.'"

Four books? (The Jewish Chronicle even wrote about only three books.) So far, Castle Hill Publishers alone has had 68 print books removed and 72 Kindle books. Then read the last sentence: After their success, the Jews at Yad Vashem are already eager to censor more books. And guess what? It is happening. 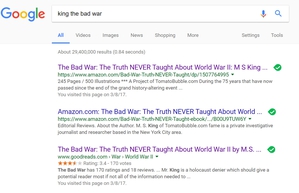 During the current banning frenzy, books not aligned with the orthodox narrative of the Second World War in general were banned as well. As an example, M.S. King's The Bad War, about which you can learn on www.GoodReads.com, was removed from Amazon. While Google still showed it as available as late as Thursday, March 9, 2017 (see image), when going to this Amazon book page, merely the usual doggy showed up: "SORRY we couldn't find that page."

An earlier version of this post reported about a case where a vendor was informed that 727 book titles listed in his Amazon account had been removed, yet a closer investigation has shown that almost all of those books, most of them utterly innocuous and unrelated to the Holocaust, World War II or even history, have not been removed after all. The only books removed were older editions of certain volumes of our series Holocaust Handbooks. We then checked all older editions of all the volumes of this series regarding their availability on Amazon. These books are out of print, but almost all of them are still offered by numerous vendors, either new or used. The result of that search is sobering: They have all been banned from Amazon as well. Here is the list of 67 books:

Hence, Amazon completely overreacted with their initial notification of this one vendor, but then backpedaled later. However, this pattern of book-banning clearly shows that whoever is behind it is trying to relegate the entire series Holocaust Handbooks into the memory hole.

In the meantime, we have heard from two more vendors who had items of their account removed by Amazon. While we are waiting for more bad news, below is a list of revisionist books not connected to our series Holocaust Handbooks which have also disappeared from Amazon. If you find out about any other book that used to be offered by Amazon but is now missing, please feel free to report it to us using CODOH's contact form.

Last night we heard from Michael Santomauro, an avid writer of Amazon book reviews, that Amazon has also moved to delete any book review pertaining to revisionist books. In his case they deleted all his book reviews, although he had written only a few on revisionist books. As a reason for this, Amazon stated that he was biased because he knew one of the authors personally (Santomauro thinks they referred to Germar Rudolf with this).

To make matters worse, book price search engines seem to follow suit. The website www.booksprice.com, for instance, seems to have used the same laundry list used by Amazon to clear the ISBN numbers they simply don't search for anymore. Entering the same author names as listed above yields the sobering result that their database has been wiped clean of most revisionist books as well:

George Orwell's Animal Farm has not yet been deleted, which is a good thing, because it contains a line we will be needing to learn. "Four legs good, two legs bad."

Repeat this many times every hour. We will be needing such thinking more and more as we venture forth into this new world, in which our books, and soon enough our thoughts themselves, will be censored and cleansed to the total satisfaction of our masters.

Amazon keeps censoring whatever Castle Hill Publishers puts out. The list below was compiled on Jan. 6, 2019. Interestingly, at that point in time many German-language books seemed to get censored only in Germany, but were available from Amazon UK and Amazon US, while English-language books get wiped out everywhere completely.

Here are the details.