Since its founding in 1986, the Polish magazine stanczyk has developed into a significant intellectual journal viewing cultural, historical and current-affairs issues from a somewhat libertarian, revisionist and “New Right” perspective. Issue No. 29 (1996), for example, features a ten-point practical guide by Jaroslaw Zadencki for viewing the forthcoming millennium from a “revolutionary conservative” perspective, and an article by Marek Wegierski on “traditionalist” ferment in contemporary fantasy and science fiction literature.

A laudatory profile of American revisionist scholar Harry Elmer Barnes appears in issue No. 27 (1995), along with an article about Barnes’ critique of the US bombing of Hiroshima and Nagasaki. (“Stanczyk” was a jester in the court of Polish King Sigismund I [1467–1548], who pretended to be foolish but was actually very wise.) 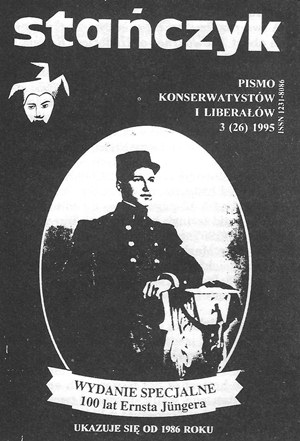 This 1995 issue of the Polish journal stanczyk is devoted to the life, work and impact of German writer Ernst Jünger.

A large portion of each attractively laid out 96-page issue of stanczyk is devoted to cogent summaries of articles in libertarian, traditionalist, rightist and nationalist periodicals from foreign lands, including Russia, Germany, France and the United States. Issue No. 19 (1993), for example, has a sympathetic two-page article about the Institute for Historical Review, with a detailed summary of the IHR Journal article, “Simon Wiesenthal: Bogus ‘Nazi Hunter’.”

A two-page report in issue No. 21 (1994) tells more about The Journal of Historical Review, and summarizes in some detail the interview with German historian Prof. Ernst Nolte, from the Jan.–Feb. 1994 Journal. An item in issue No. 24 (1995) about the March–April 1994 Journal provides a detailed summary of Robert Faurisson’s article on the Warsaw ghetto uprising, and a mention of the Journal interview with French “New Right” author Alain de Benoist.

Much of stanczyk issue No. 22 (1994) is devoted to unresolved historical issues of the Second World War, including a 12-page review by editor Tomasz Gabis of David Irving’s book, Hitler’s War. Stanczyk issue No. 30 (1997) contains a two-page summary of IHR Director Mark Weber’s article, “Zionism and the Third Reich” (originally published in the July–August 1993 Journal), as it appeared in translation in a 1995 issue of the Berlin periodical Sleipnir.

In two recent issues of this self-described “conservative and liberal” journal (No. 29 [1996] and No. 30 [1997]), chief editor Tomasz Gabis forthrightly tackles the hottest of hot issues with an impressively written and well-referenced two-part, 57-page essay on the “Holocaust religion.” “The Holocaust,” he points out, is not treated as a chapter of real human history, but instead is ceaselessly presented as an ever-relevant, quasi-religious “myth.”

As Gabis explains, the Holocaust has not only come to play a pivotal role in Jewish religious life and the collective Jewish consciousness, but has become a central element in the cultural, political and intellectual life of the contemporary West, with a profound impact on relations between Jews and non-Jews.

Although the core of this “myth” is Jewish, the Holocaust has been universalized through the mass media and public education, becoming an obligatory prism through which we are expected to view the past, especially 20th century history. Fundamentally not comparable to any other chapter of history, “the Holocaust” is a “cosmic” event marking an entirely new era in human relations. Since Auschwitz, it is claimed, we can never again look at Western civilization, Christianity and even God in the same way.

Like any other potent religion, Gabis notes, the Holocaust has its own shrines, sacred texts, saints, relics, rituals, taboos and heretics. “High priest” Elie Wiesel insists that what he calls “the Event” must be viewed with a kind of mystical reverence. Implicit in Holocaust theology is the doctrine of collective guilt (especially for Germans, but increasingly for all non-Jewish humanity), and the notion that Jewish deaths weigh more heavily than those of non-Jews. To the extent that Christian, and especially Roman Catholic, leaders embrace this Holocaust religion, they accept a “Judiazation” of Christianity, and betray their own religious principles and heritage.

Because no people, aside from the Germans, has been so stigmatized by this new religion as the Poles, “the Holocaust” is the basic source of tension in Polish-Jewish relations.

During this final decade of the twentieth century – in the aftermath of the “Cold War” division of Europe and the end of the “postwar era” – the really significant political and intellectual struggle is not between “right” and “left,” but rather between the “politically correct” or “taboo-affirming,” and iconoclastic insurgents everywhere who oppose the “one world” homogenization of all cultures, races and nations.

Among the “conservative and liberal” periodicals that have emerged around the world in recent years, stanczyk is a particularly effective voice defying “left-right” categorization. Now with a circulation of about 2,500, it is sold in bookstores in Warsaw, Krakow, Poznan and other major Polish cities. For further information, write: stanczyk, ul. St. Pietaka 9, 51-140 Wroclaw, Poland.

Published with permission, courtesy of the Institute for Historical Review (IHR).

For the current IHR catalog, with a complete listing of books and audio and video tapes, send one dollar to: