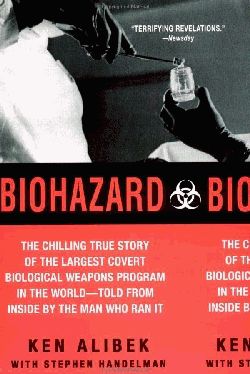 Weapons of mass destruction, a term causing Pavlovian reflexes in many people today, as the U.S. government uses its citizens' fear to enforce its imperial politics, have been used since Word War I. The use of poison gas on the western front during World War I has been described thoroughly, and everybody knows about the two atom bombs the devastated Hiroshima and Nagasaki. It is also known that the Germans would have had the possibility to use new, devastating chemical weapons – Sarin and Tabun – but that they decided not to use it, apparently because Hitler was opposed to WMD.

What is less known is the biological warfare that was waged on the eastern front during World War II. In his book Biohazard,[1] Ken Alibek, between 1988 and 1992 deputy chief of the Red Army's biological weapons program, summarized his experiences and results of his research of Soviet archival records. According to his findings, the Soviets had used germs causing the tularemia disease against Wehrmacht units fighting during the battle of Stalingrad in 1942.[2] The symptoms of this disease are headache, nausea, and high fever, which can lead to death if untreated. Although this disease is endemic in Russia with some 10,000 cases every year, it had a sudden outburst in summer 1942 in German soldiers, bringing the German campaign in southern Russia to a temporary halt. But the disease later spread into the civilian population and also over to the Soviet side, which explains why biological weapons are not as promising as they seem to be to some.

Alibek also reports that typhus had been considered by the Soviet Government as early as 1928 to serve as a bio-weapon during wartime. Although it is yet unknown whether this disease was spread by the Red Army, there is one indication that typhus germs were indeed used as a weapon in the east against the German occupational forces: In frequent reports to the Joint Secretariat of the Combined Chiefs of Staff of the Allied forces, Colonel L. Mitkeiwicz, Liaison Officer of the Polish Secret Army to this Combined Chiefs of Staff, reported about the activities of his secret army. We reproduce here the report dated September 7, 1943.[3] The Polish Secret Army was commanded from London by General Sikorski, who was killed during an airplane crash at Gibraltar on July 4, 1943. This Polish Secret Army is not to be confused with the National Liberation Army, which was founded in 1944 by communists.

Even though it must be expected that the figures given in this report might be exaggerated, the fact that Polish underground fighters caused some casualties to the German occupational forces is indubitable, and even though such guerilla warfare against an occupational power is illegal, one cannot blame the Poles morally for waging such a war against what they conceived to be an illegal occupation. What is of interest here is the penultimate page of this report, which lists under "3. Activities of retaliation":

Fritz Berg was the first to describe in detail the German efforts to fight typhus[4] – which can probably be called the main killer in the German concentration camps – and thus to save the lives also of many Jewish inmates in their camps.

Hans Jürgen Nowak and Hans Lamker were the first to point out that the Germans made an astounding decision in 1943/44: During the war, the Germans had invented microwave ovens, which they developed not only to sterilize food, but also to disinfect and delouse clothes. The first operable microwave delousing unit was planned to be put into operation on the eastern front in order to delouse and disinfect the clothes of German soldiers, whose second most serious threat was various infectious diseases. But instead of deploying it on the eastern front, the Germans reconsidered their decision and finally sent this unit to – Auschwitz, in order to save the lives of their prisoners, most of them Jews.[5] Hence, when it came to protecting the lives threatened by infectious diseases, it was obviously more important to the Germans at that time to save the inmates in Auschwitz, who were employed in the war industries in Upper Silesia, than to save their soldiers on the battle field.

Whereas the Germans were desperately fighting typhus on all fronts with all technologies available in order to save the lives not only of their soldiers, but also – and to some degree even more importantly so – of their prisoners, Germany's enemies were active to thwart all German efforts to save lives.

After the war, however, Germany's enemies exploited the explosion of typhus epidemics in Germany and blamed it on the

Germans by accusing them of having deliberately exposed millions of innocent people in their camps to this disease, and also by turning one of the means used to fight the disease – Zyklon B – into an alleged agent of mass murder.[6]

Truth is the first victim in every war.

Whereas the Germans were desperately fighting typhus on all fronts with all technologies available in order to save the lives not only of their soldiers, but also of their prisoners, Germany’s enemies were active to thwart all German efforts to save lives.