Auschwitz, Crematorium I: How Many Holes?

One more simple question for the historians. 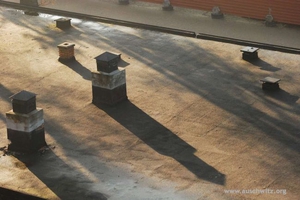 The roof of Crematorium I today. Visible are four small introduction shafts in the background, and the two large ventilation chimneys of the furnace room in the foreground.

Continuing after our simple question on Yitzhak Arad, this time we move to Auschwitz for another one. According to official history, the morgue of Crematorium I was converted into a gas chamber. In order to introduce the poison gas into the chamber, four rectangular holes were opened on the roof.[1] Revisionists claim that these holes never existed and that the ones we see today were opened after the war. But before determining the When we must determine their number. So here is our next very simple question:

How many holes were there in the roof of Crematorium I?

We open the book Auschwitz: The Nazis and the Final Solution by Laurence Rees, and we read Hans Stark’s testimony:

“During a gassing Zyklon B had to be poured through both openings of the gas chamber room at the same time […]. As the Zyklon B was in granular form, it trickled down over the people as it was being poured in.” (p. 120)

This description suggests TWO holes.[2] But on the very next page, witness Josef Paczynski declares:

“Then an SS man crawled up on the flat roof of the building. He put on a gas mask, he opened a hatch [in the roof] and he dropped the powder in and he shut the hatch. When he did this, in spite of the fact that these walls were thick, you could hear a great scream.”

This implies ONE hole.[3] We now turn to Eyewitness Auschwitz by Filip Müller, where we find this:

“Meanwhile, the Unterführers on duty had gone onto the crematorium roof, where the other three SS leaders had addressed the crowd. They removed the covers from the six camouflaged openings. Then, protected by gas masks, they poured the green-blue crystals of the deadly gas into the gas chamber.” (p. 38)

So SIX holes.[4] That means that according to the available evidence, the holes on the roof of Crematorium I were either 1, 2, 4 or 6!

Question for the rest: Does feeling confused counts as anti-Semitism?