The Case of Brushwood That Was Not Available

Exterminationists offer a wide variety of means by which millions of human cadavers, victims of the so-called Holocaust, are said to have been disposed, ranging from stationary or portable crematoria to pyre burning, but the version currently offered by the Treblinka Museum on their website is perhaps the most ludicrous of them all. The museum claims that 800,000 alleged victims were burned on grates made of rails, with brushwood as the source of energy. The brushwood necessary to fuel those pyres was allegedly collected in nearby forests, or was simply somehow miraculously available in sufficient quantities during the first half of 1943, when the claimed Treblinka victims are said to have been cremated. In this paper, the authors attempt to describe this operation, with strong emphasis on the logistics needed.

Pyre Cremations Now and in Treblinka

We are invited (or commanded) to believe that corpses in Treblinka were burned on pyres using brushwood (Polish: chrust) doused with gasoline[1] as the fuel. The operation is said to have lasted half a year in 1943 (from February to August).[2] “Chrust” in Polish means “small dry branches of trees or shrubs that have broken off and fallen to the ground”.[3] Such brushwood is usually used to start and kindle a fire, to ignite larger pieces of wood (large branches and logs).

The present-day practice of pyre cremation reveals that the quantity of wood needed to cremate a corpse is as follows according to various sources (in kilograms): 500-600,[4] or 400-500,[5] or 400-500,[6] or 270-400,[7] or 500-600,[8] etc. These data come from India, where pyre (open-air) cremation with wood as fuel has been common practice for centuries and still is today. For this paper, 400 kg (880 lbs) of brushwood per corpse is taken as a starting point for further calculations. Thus, at least 320,000 metric tons of brushwood would have been necessary to pyre-burn the claimed number of corpses in Treblinka (800,000, as per exterminationist sources). The inconvenience of brushwood is that it is voluminous - its weight per unit of volume is slight. With a mechanical compactor, such as a trash compactor, its density can be increased up to maybe a third of that of solid wood, hence some 300 kg/m³, but without this, its density is as low as 40 to 80 kg/m³. For this paper, it is assumed that 80 kg (176 lbs) of dry brushwood (meaning not soaked by snow or rain) occupy a volume of 1 cubic meter. Thus, we are expected to believe that the volume of brushwood consumed during the pyre cremations at Treblinka amounted to some four million cubic meters.[9] If we assume furthermore that an average truckload of brushwood is 20 cubic meters,[10] hence carrying each on average 1,600 kg (3,527 lbs) of brushwood, then one single truckload of brushwood was good for the cremation of only 4 (four) corpses. Therefore, to transport the brushwood needed, 200,000 truckloads of it would have to have been transported into the camp.

Not Much of the Forests Near Treblinka

Illustrations 1 and 2 show two maps of the Treblinka Region as of today, taken from an online source.[11] The green areas are forests. Visibly, there are no huge forests nearby now. During World War II, there was none either, as forest coverage in Poland has actually grown by 50% since the end of the war (from 20.8% in 1945 to 29.6% currently).[12] This is a typical Polish rural neighborhood with some forestation. There was and is nothing atypical in this part of the country. The question arises, from where did the Treblinka Camp get the four million cubic meters of brushwood it is implied to have needed? 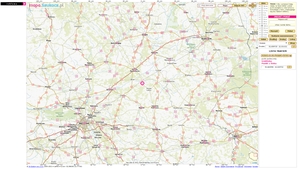 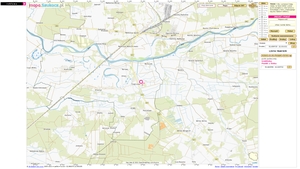 Illustrations 1 & 2: Large-scale and small-scale map of the Polish region around Treblinka (red circle; click to enlarge).

The following account is to a large extent based on the history of my family on my mother's side. She spent her childhood years in a village 50 km (30 miles) to the southast of Treblinka. I spent many vacations there, during which I chopped up stumpwood my grandmother needed for her kitchen stove. My mother told us that the forests at that time (1980s) were much different than those of her childhood years (1950s), and consequently also the forests of today. The striking characteristic of present-day forests is that they are “littered” with brushwood due to the fact that Polish households no longer gather this inefficient fuel, as they did in rural war-time Poland. Back then, it was unthinkable to find a piece of brushwood, she said. Nearby forests were picked “clean”, that is, they were totally devoid of any brushwood. Brushwood was constantly gathered by locals and used as fuel for cooking and heating. Forays into the forest to pick up brushwood were routine, and no piece of brushwood was overlooked. Besides, forests were used for grazing cattle, so clearing the forest of brushwood, thus allowing grass to grow, was beneficial for grazing. There is no reason to assume that this custom was any different in the Treblinka area. Thus, it should be assumed that the forests around Treblinka were devoid of noticeable amounts of brushwood. The inevitable response to the brushwood question is simple – there was no abundance of it in the local forests. Thus, it is reasonable to assume that the camp staff had to bring brushwood from large areas at considerable distances of maybe 20 km (12.5 miles) on average.[13] This way, it is possible to compute the necessary number of trips by the camp’s motor pool required. It would have been 200,000 round trips of 20 km one-way, covering a total of some 8 million km (some 5 million miles). With an average fuel consumption of 15 liters per 100 km per truck, the whole operation would have consumed 1.2 million liters (317 thousand gallons) of liquid fuel, likely diesel.

We are expected to believe (and/or, barred under penalty of law from disputing) that the corpses were burned on a grate made of rails. Due to lack of reliable exterminationist data, let's assume that the rails were 1 m above ground. This leaves a space of 1 m beneath them for depositing brushwood. Experience with large-scale outdoor carcass cremations during livestock epidemics has shown that pyres are most-efficiently operated with one layer of carcasses on top of a layer of fuel, where a packing density equivalent of eight to ten corpses per running meter is reasonable,[14] meaning that up to 300 human bodies would fit on a grate that is claimed to have been 30 m long.[15] Ignoring children and being generous, let’s assume that the average adult human body back then was 165 cm tall (1⅔ m). This results in a space underneath each body of merely (1.65 ÷ 10 =) 0.165 cubic meters, which sufficed only for depositing some (80 kg × 0.165 =) 13.2 kilograms of brushwood per corpse. By dividing the 400 kg of brushwood necessary to burn a corpse by 13.2 kg of one “load” of brushwood, we come to the conclusion that it would have been necessary to refill brushwood beneath the rails of a burning pyre roughly 30 times for every single cremation of 300 corpses, meaning that it would have been necessary to continually add fuel until these corpses were burned completely. Due to the large volume and the composition of the fast-burning fuel, the extreme heat radiating from the pyre would have made it necessary to use long-handled pitchforks for refueling. Considering the unwieldy and stubborn nature of dry brushwood, refueling these pyres would have been extremely cumbersome and slow-going. Since that work would have had to be done continuously, it would have been necessary for the workers fueling the fire to wear heat-protection gear, such as asbestos suits. Never mind that such high-tech suits were invented only in the 1930s and were certainly not made available to some Jewish slave laborers in rural Poland during the war. Such gear is never mentioned by any witness. Hence, these workers would have burned to the crisp within the first hour of their work.

Experience with large-scale outdoor carcass cremations during livestock epidemics has also shown that such large pyres burn up to a day and more, and the embers they create are hot for another day or so, meaning that on average such a pyre could be cleared from ashes and unburned remains and restocked only after maybe a day, but probably only after two days. Being generous, a single such grate working all day round without breaks would have had a capacity of some 300 corpses a day. In order to burn 10,000 corpses in such a way, some 33 grates would have to operate all day long, whereas Wikipedia offers only six:[16]

“Six such grates were built near the mass graves; each could burn about 2-3 thousand corpses at a time”

Now, let’s assume it is possible to arrange three human corpses in one layer of each running meter of the grate (especially when alternating their orientation: head first, feet first, etc.). This means that one layer could hold (3 × 30 m =) 90 corpses. To reach three thousand corpses, we would have to stack the corpses in 33.3 layers. If each layer has the height of only a fifth of a meter (20 cm), the resulting pile of human corpses on the grate would amount to (33 × 0.2 = ) 6.6 meters, or the height of a two-story building. When building this pyre, how did the Jewish slave workers get the corpses onto the top of this growing pile, once it was higher than they were tall? And how does one keep a pile of highly uneven, non-rigid components (humans) that is (6.6 m ÷ 1.65 m =) four times higher than it is wide from falling over? Moreover, if we assume an average weight of 50 kg for each corpse, three thousand corpses would have weighed (50 kg × 3,000 =) 150 metric tons. This weight had to be supported by the iron rails allegedly used to form the grate. That iron would have gotten rather soft due to being exposed to the extreme heat of the fire all the time. Hence, it would have had to be supported by many support pillars, one every meter or so, which would have made it very difficult to constantly refuel the fire with brushwood.

But that’s not the end of the absurdities. Wikipedia also claims an immense daily capacity for each of these iron-grate pyres:[17]

Too Many Impossibilities Make the Whole Thing Impossible

Such an accumulation of impossibilities is not worth exploring any further. First of all, rather than being abundant, there was basically no brushwood available in the regional forests. Second, at wartime when petroleum-based fuels were very scarce and strictly rationed, a camp in such a remote location could not have obtained gasoline or Diesel fuel in the quantities needed – 1.2 million liters (317 thousand gallons) over half a year of cremation activity – in order to collect and transport the required brushwood, which in itself is a ludicrously inefficient fuel for cremations. The reasonable solution would have been to employ, within the radius of some 20-30 km from the camp, all locals with their horse-drawn carts to gather and transport all the brushwood accessible – even with remuneration – but exterminationists don't report any such thing.

Next, the claimed stacking height of the pyres is impossible, and it would have been physically impossible to fuel it at the pace needed with the necessary brushwood. Such a huge logistical operation to bring the needed brushwood into the camp, which is said to have gone on for half a year, would have created a sensation in the whole region, but exterminationists don't report any such thing. Besides, winters were quite snowy in those times as a rule, meaning that the brushwood was to be scavenged from under the snow from February to March, and trucks were to be driven along snow-covered forests roads, and then during the spring melt on muddy roads – one gigantic mess.

The author expresses his gratitude to Germar Rudolf, who not only “polished” the language, but also contributed substantively. All errors are mine alone.