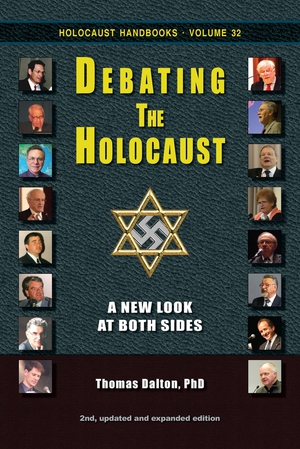 Debating the Holocaust: A New Look at Both Sides 2nd Edition by Thomas Dalton

Inconvenient History carried a review of the first edition of Thomas Dalton’s Debating the Holocaust. The second edition has now been published, and the mask is down: Dr. Dalton admits—professes, in fact—that he is, indeed, a Holocaust revisionist, much as everyone, friend and foe alike, has long presumed.

It’s done in a way that is not only more-credible to those who concern themselves with the author’s true outlook on things, but further lends considerably greater impact to the analysis so conducted. As in the first edition, the arguments and “evidence” that support the regnant version of the story are presented, fully and fairly, or at least as much so as are the countervailing elements. Then, carefully compared at all salient points, the revisionists’ arguments are presented. But in this second edition, Dr. Dalton does not trouble himself to pretend that he may at any point have found the opposing arguments in any way comparable in his judgment. He grants up-front and beforehand that he in general has decided in favor of the revised version, and he carefully details exactly why in terms that should appeal to any devotee of the traditional perspective so long as said devotee has retained with his devotion, a comparable devotion to logic and the quality of evidence.

The presentation remains, as before, if not “balanced” in terms of the temper of the narrative, at the very least fair and equitable in terms of the presentation of the evidence and of the conclusions following therefrom. And it is in the details (details, details!) of this evidence and these conclusions that Dalton’s readers remain totally free to follow their own dictates of reason and due consideration of evidence. What Dr. Dalton does not countenance, and this he does most tellingly, is acceding to the authoritarian, moralistic, even artful blandishments in which we all are daily immersed to the point of suffocation. In a manner doing credit to all the heroic heretics of history from Herodotus to Harry Elmer Barnes, Dalton propels the reader through the standard litanies, admitting them so to be, of the opposing sides. At the end, the author declares the winner to be: revisionism!

Debating is much more a forensic assembly and analysis of data than it is a sociological study. For example, anyone expecting to find an account of the origins of the Holocaust or National Socialist policies and practices regarding Jews or race generally will be disappointed. The scope of Debating is strictly what happened, when, where and how. Motivations are not contemplated, neither of the actors nor of the historians quibbling about the whole thing in latter times. Fortunately, despite this omission of preambles (about which in any case there would seem to be rather less debate), Dalton does carry the reader into the present day with some contemplation of the “uses” to which the Holocaust tradition has been put in the time since the events first studied. Since exploitation of the Holocaust mythology in fact animates the debate that forms the subject of the book, it is indeed fitting that this connection be clearly made and documented in substantial detail. The entire section in effect addresses the question occasionally heard, “Why concern ourselves today with what did or did not happen so long ago?”

The release of the second edition marks the incorporation of Debating into the growing Holocaust Handbooks series of Castle Hill Publishers as Number 32. This incorporation brings with it the signature forest-green cover, attractive layout, punctilious editing and typography and quality printing and binding, along with the mandatory availability in e-book format. My only quibble with the transition is that industry-standard chapter labelling on the recto pages has been dispensed with, as in all recent releases of Holocaust Handbooks. This defect annoyingly hampers use of the book for reference purposes, a purpose I should think central to the purposes of the series, and is at odds with the quality attributes elsewhere in such abundance.

Debating’s supreme virtue since its first publication has been in the volume’s broadly covering all major factors in such debate of the Holocaust as can be conducted in the shadow of censorship and criminalization. This being the case, the work’s currency is of greater importance to its value than it would be, say, to a work of a more purely historical bent. It’s gratifying to report that this edition is as up-to-the-minute as any fixed body of work could be; anything and everything that changed since the first edition is updated, and corrections to the earlier work made as appropriate. Dalton even revised his best estimate of the number of Holocaust fatalities implied by the sum of the latest revisionist studies, of which there have been many. Dalton’s expressly unmagical number of aggregate deaths per revisionism rose from 516,000 to 570,000. At this rate, he’ll be back to six million by the 5,990th edition. Don’t hold your breath!

Objectivity is the understanding of a robot. Only a machine, somehow made capable of ingesting inputs of some kind, could objectively calculate a result of the inputs. We have computers that are doing just this even as I type, and likely as you read. But my typing—and your reading—these are not, and could never be, objective, nor mindless. At the same time, they could be, if we tried to make them so, open to a wide range of interpretations, conclusions, and other reactions still so cognizant as to keep the end conclusions related to those inputs—the data as it were. We—we humans at the beginnings and ends of these processes—can better reconcile our conclusions, our feelings, our worldviews, to the data that we perceive in those inputs, the better we steel our reflexes against what offends our previous conceptions and habitual loyalties.

In its most-valuable essence, Debating remains what its first edition was: an encompassing overview of the debate (so to misname a confrontation in which one side has—and uses— the prerogative of calling down the law against the other side) that fairly presents the best arguments of both sides and, admittedly with prompting, still allows each reader, if not to actually adopt final conclusions, at least enables—nay, encourages—each to embark on the long and in many cases soul-searching intellectual voyage that could ultimately avail the reader’s final, exhausted washing-up on the distant shores of an informed and reasonably confident understanding.

On those far-sought shores, one might find Dr. Dalton him- (or her-)self. Or one might find Elie Wiesel or Raul Hilberg. But above all, first and foremost, one would find oneself.