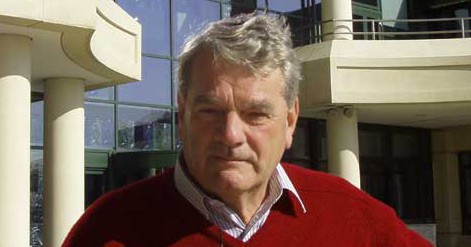 AMSTERDAM — A Jewish-Dutch watchdog group on anti-Semitism called on owners of event halls not to host Holocaust skeptic David Irving, who reportedly is planning a lecture in The Hague.

Irving, who has been barred from several countries and was jailed in 2006 in Austria for denying or minimizing the Jewish genocide, is scheduled to speak somewhere in The Hague on Feb. 25, the Center for Information and Documentation on Israel, or CIDI, wrote in a Feb. 20 statement.

It called on “all owners of event halls in The Hague to offer no platform to the convict” from Britain.

The topic of the lecture that Irving plans to deliver is “Hitler, Himmler, and the Homosexuals,” according to CIDI.

Hague Mayor Jozias van Aaren said he would intervene to ban a lecture by Irving, according to CIDI.

In 2011, CIDI brought about the cancellation of a planned lecture by Irving at Amsterdam University College. The city’s mayor forbade the gathering, leading to its cancellation.

Soviet premier Nikita Khrushchev might have had David Irving in mind when he once warned that historians are dangerous because they have the power to upset everything. German Chancellor Otto von Bismarck once said that the main thing is not to write history, but to make it. Irving is a man who has been able to do some of both.

He is also living proof that the life of an historian need not be dull. The leftist British daily The Guardian once commented.

“If one can overlook his outrageously odious views, Irving-like Hitler-can be a funny man. The humor comes from a hint of self-mockery and an obvious delight in making liberal flesh creep.”

A professional historian, Irving has little respect for taxpayer-financed scholars who are guilty of what he calls “inter-historian incest,” and who thereby help to keep alive dangerous myths and legends left over from wartime propaganda.

His first work, The Destruction of Dresden, was published in 1963 when he was 25 years old. Since then, he has published more than thirty books, many of them best-sellers, including biographies of Hermann Goring, Winston Churchill, and Erwin Rommel. He is currently at work on a biography of Joseph Goebbels.

Several of Irving's books have appeared in various languages, and several have been serialized in prominent periodicals, including the Sunday Express, the Sunday Telegraph and Der Spiegel. Over the years, he has also contributed articles to some 60 British and foreign periodicals, including the Daily Telegraph and the Sunday Express in London, the Mainichi Shimbun in Tokyo, and Stern and Der Spiegel in Hamburg.

Irving's reputation first came under vicious attack following the publication in 1977 of Hitler's War, a monumental work that was hysterically criticized for its contention that Hitler did not order the extermination of Europe's Jews. The mass killings must have been carried out by Himmler and his cohorts behind Hitler's back, Irving concluded at that time.

It is also gratifying to realize that, as a result of each of these recent controversies, hundreds of thousands -- if not millions  of newspaper and magazine readers around the world are now aware that a historian of recognized international stature rejects critical aspects of the orthodox Holocaust extermination story.