Comments on Germany must Perish!

This book enjoyed brisk sales for a time in 1941, and was reviewed[**] by no less than the New York Times, the Washington Post, Time magazine and the Philadelphia Record. This brought it to the attention of Josef Goebbels, who then distributed a million copies of the screed with German commentary to the military as an inducement to resist surrender. It and release of some of the information regarding the Morgenthau Plan for a punitive occupation of Germany are thought by many to have, when combined with the demand for unconditional surrender, extended the war needlessly at a cost of millions of lives. When Stalin complained to Churchill on Oct. 9, 1944 that knowledge of the Morgenthau plan was making the Germans fight harder, the British P.M. made subsequent remarks which might indicate that the extension was not all that unwelcome to him, as he deemed it important "to kill as many as possible in the field."[1]

On August 18, 1941, when Hitler was absorbed with Operation Barbarossa, Goebbels paid him a visit and showed him a copy of the book. Hitler was angered by it and gave Goebbels approval to immediately begin requiring all Jews to wear identifying armbands, which Goebbels on his own changed to the yellow star of David rather than the intended plain yellow and white armband.[2]

According to one German reader of this commentary:

"Kaufman's theory was, of course, heavily exploited by the propaganda machine in Germany, and the motto in the streets was: 'Enjoy the war while it lasts, because peace shall be terrible.'"

Finally, when U.S. Supreme Court Justice Robert Jackson was preparing to assume his responsibilities as the chief prosector at Nuremberg he met with Judge Samuel Rosenman on May 12, 1945 to examine papers related to an earlier plan made at Yalta to send several million Germans to Russia as slave laborers. When Jackson said that he did not believe that Roosevelt had agreed to anything like this, "Rosenman explained that F.D.R. had 'thought the Germans deserved to be so punished,' as the judge noted in his diary, 'and emotionally was very bitter [and] had even seriously discussed sterilisation and more or less in fun had devised a machine to perform the operation on a mass production basis.'"[1a]

[1]
Nuremberg: The Last Battle, David Irving, p. 24
[1a]
ibid. p. 42
[2]
Goebbels: Mastermind of the Third Reich, David Irving, p. 372f.
[**]
This initially read "lauded," but a copy of the Time magazine review furnished by J. McCarthy shows that description to be inappropriate for this one review, applicability unknown for the others. Mr. Kaufman worked in advertising in Manhattan, and pulled selective words from the review for his leader. One is then left with only the quandary of why the preeminent media outlets in the United States would review this book at all, given its unknown author and horrendous content. And we note too that the Time review treats it with bemusement rather than denunciation as unworthy of consideration by civilized people. The review is now appended to the book. 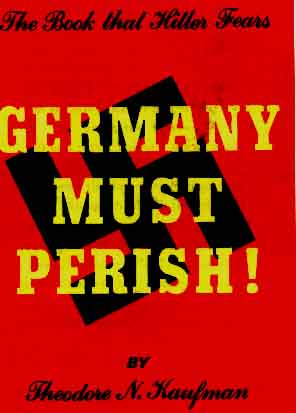 This dynamic volume outlines a comprehensive plan for the extinction of the German nation and the total eradication from the earth, of all her people. Also contained herein is a map illustrating the possible territorial dissection of Germany and the apportionment of her lands.

PRINTED IN THE UNITED STATES OF AMERIKA (sic)