How the Allies Launched the Holocaust at Casablanca in 1943

Searching for “the moment the Holocaust began” is quite as pointless as the never-ending search for “the missing link” in the evolution of homo sapiens.  Analyses of the event(s), however the events are constituted, often go back to ancient intergroup enmities and exploitations as far back as the Middle Ages. Others focus on misrepresented, but discrete, events such as the January 1942 Wannsee Conference.

Finding events and moments of significance to what in fact did happen and to the motivations in fact in play, however leads to a time still later, a place actually outside Europe, and actors including no National Socialists nor in fact Germans of any stripe whatsoever. The time, place and actors, I submit, were:

The occasion, of course, is the famous Casablanca Conference. The original idea, for the declaration and the subsequent attainment of its goals, seems to have come from the inexhaustibly evil mind of American President Franklin D. Roosevelt, possibly the greatest warmonger who ever lived. At least, the proposal came from him, and the other two leaders, one or more of them obviously bent on conquest, signed on to it, in the process condemning untold millions to death and privation and likely, depending on an extensive counterfactual analysis, at least doubling the death, destruction and cost of World War II, including its depredations upon the Jews of Europe.

The idea itself, easy to state, inspiring to hear—or terrifying, depending on which side you are hearing it from—is Unconditional Surrender. Unconditional Surrender means that your armed forces will continue to fight its opponents until said opponents yield admission to your armed forces to their own homelands—the places where they were born and grew up, where they married, where their wives and children still live. Foreign soldiers will freely roam the defeated’s streets, thereon free also to abuse, torture, molest, rob, and rape those they encounter on said streets and free, further, to knock on—or knock down—the door of any house or shop that might interest them, and therein to avail themselves of anything—or anyone—that (or who) might in any way mitigate the insufferable deprivations that plague every soldier in all places and all times of history.1 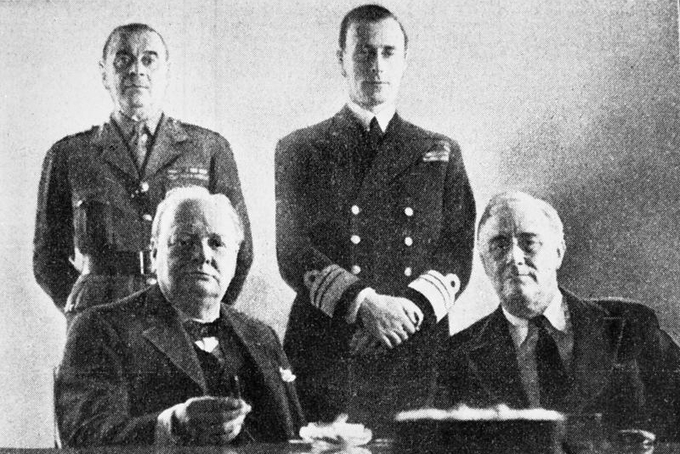 When your country’s enemy credibly declares the aim of Unconditional Surrender, your enemy’s threat penetrates viscera you may never previously have known you had. Patriotism, loyalty to this or that regime, however hateful or congenial, becomes utterly irrelevant; the wolf will not remain howling outside your door—he will enter your home, destroying it if necessary, and have his way with all he finds therein.

If, in your country, among your population, in your government, the professions, the media, and/or academia, there happen to be members of a group whose members outside your country seem to have inspired the savage battle cry of Unconditional Surrender by your country’s enemies, then you might favor restriction, on suspicion, of every potential member of this group. Such, of course, was the position of the hapless Jews of Germany during World War II, despite many of them likely being loyal Germans, if not National Socialists. It was also the position of the hapless Japanese-Americans of the western United States at the same time.

The comparison between the Japanese in America and the Jews in Germany and the territories Germany occupied ends right there: with few setbacks of any moment, America won that war, and Germany, tragically, disastrously, lost it, along with massive proportions of its houses, buildings, bridges, factories, territory, and people.

The Holocaust, broadly defined, was displacement, dispossession, enslavement and frequently death of groups disfavored by Germany’s National Socialist government, classically, if not mostly, Jews. It was no more a program of genocide than was the program of the conquering Allies in their blockading, bombing and eventual expulsion from their homelands  of helpless Germans in their millions, leading to fates comparing most “favorably” in both severity and numbers with those alleged to have happened to Jews—and all this before the atrociously brutal occupations.

The beleaguered Germans placed millions of Jews and others in their infamous “concentration camps,” most of which were in fact labor camps not altogether unlike those in Oak Ridge, Tennessee and a thousand other places (including Los Alamos) in the US and elsewhere in the Allies’ territories. Unlike those Allies (except for a famous exception in Bengal, a colony controlled by Ally Great Britain),2 the Germans eventually lost their ability to provision, and combat disease in, their densely populated industrial housing tracts.

The Allies’ disruption of the Germans’ industrial efforts to resist the former’s incursions were not at all limited to the killing and “dehousing” of Germans and their wives and children, nor to the destruction of their roads, factories, bridges and railroads. The Allies, knowingly or otherwise, killed thousands of concentration-camp inmates at Mittelbau-Nordhausen in an April 1945 bombing raid. Unfortunately, the only inmates above ground at this underground industrial complex were those in the camp hospital with tuberculosis and other diseases—it was mostly these patients who were killed, and whose deaths in famous propaganda photographs was laid to the Germans by Americans overrunning the site a week after the raid.

This same grotesquely “counter-productive” campaign assumed another guise in the sinking by the Royal Air Force of the German passenger liner Cap Arcona in the following month, killing at least 5,000 of the people the Allies’ savage “humanitarian intervention” was trumpeted as intending to save.

The Holocaust, then, perceived as chiefly the result of the Germans’ desperate, doomed effort to save their homeland, may be seen to have ensued, in its most-lethal and cruelest phases, from the position the government and people of Germany found themselves in as a consequence of Unconditional Surrender, and this takes no account of those many in countries to the east of Germany who clearly saw the Soviet behemoth descending on their own homelands as a wolf, as it were, in “liberators’” clothing.

But that is hardly half of the story, at least so far as the perspective of the modal “informed” German of the day is concerned. In 1944, as though to add fuel to this diabolical fire, Churchill, Roosevelt, and the latter’s Jewish advisor, Henry Morgenthau, gathered in Quebec for yet another of the demonic conferences at which the victorious Allies plotted the utter destruction of the society and people of Europe’s largest civilization.3

There, as a condition of a $6-billion “loan” to the United Kingdom, FDR (remember FDR? We last saw him in Casablanca) secured Churchill’s reluctant assent to a vicious scheme to indefinitely “pastoralize” Europe’s former industrial powerhouse, Germany. News of this plot, well seized-upon by Germany’s ever-vigilant propaganda minister Joseph Goebbels, was credited with the most-unwelcome (and surprising) ferocity of German troops opposing the eastward advance of the Allies from France in the Battle of the Bulge. A bitter joke became popular in Germany toward the end that went, “Enjoy the war. The peace will be even worse.” The conditions of the Unconditional Surrender were becoming apparent to the Germans, who in fact hardly imagined the privations and atrocities that would be visited upon them by the victorious Allies, to the everlasting shame of the latter.

As we search in the detritus of history for the causes, the “beginnings” of various developments apparent in the light of retrospection (and the unopposable declarations of the victors), it is obviously essential to carefully specify the nature and magnitude of the developments whose genesis is sought. Most “Holocaust” “history,” of course, fails miserably at this indispensable launching point.

If that failing be rigorously and honestly corrected, however, the originary analysis itself can, and will, undergo profound alteration from the one posited on the basis of allegations of phenomenal German racism and genocidal intent.

In fact, properly viewing the tragedies of the Holocaust as part of the paroxysms of death of a proud, vigorous, and terrified race shifts the bulk of the blame from them onto the heads of their vengeful, zealous malefactors.

Casablanca. 1943. The Big Three. They didn’t start the war, nor the Holocaust. But they brought on the greatest part of both.