Jewish Co-Responsibility for Jewish Persecution in 1941

Since 1996, a photo exhibition organized by a communist organization located in Hamburg, Germany, which featured alleged war crimes of the German Wehrmacht during World War II, has been shown in many German and Austrian cities.[1] Due to its one-sidedness and distorted, if not outright false, 'anti-fascist', i.e., Stalinist way of depicting events at the eastern front during WWII, this exhibition has caused massive criticism by various historians.[2] Politicians and media in Germany, however, most of whom supported this propaganda exhibition, were totally silent about this criticism. This changed only in 1999, after the Polish historian Bogdan Musial had demonstrated that numerous photos of this Wehrmacht exhibition as proof of the crimes of the German army in reality show victims of the Soviet NKVD.[3] Though he was not the first who pointed this out, he was the first one to be heard by the media, because as a Pole he enjoyed the advantage of not being exposed to the immediate suspicion of wanting to whitewash Hitler, a suspicion every German national faces if uttering anything about WWII, the Wehrmacht, or the Third Reich that is not exclusively negative. The broad publicity of Musial's 'discovery' finally led to an investigation into the veracity of said exhibition. Though this investigation was conducted by 'experts' appointed by the organizers of the exhibition, i.e., by persons of a similar left-wing radical ideology, the results were still so devastating that the exhibition was temporarily shut down. It re-opened three years later after some minor changes.

The controversy about the anti-fascist propaganda exhibition goes like a red thread also through Musial's new book reviewed here. Musial turns against the so-called German Vergangenheitsbewältigung (coming to terms with the past), which is no longer motivated by moral intentions, but which is today used by (post-)communist and socialist falsifiers of history in order to ostracize their political competition in the political center and on the right. Even though the accusation of political abuse of history is justified, Musial is on slippery ground here, because this accusation, which is basically leveled against almost all German media, exposes him to suspicions of being generally hostile towards their leftist propaganda. In their zeal, the German media ignore that Musial rejection of politically biased historical propaganda is not directed against them, but against all distorters of historical writing. Hence, Musial's new book with his broadside against political correctness in historiography will undoubtedly lead to him losing his status as a darling of the German media. 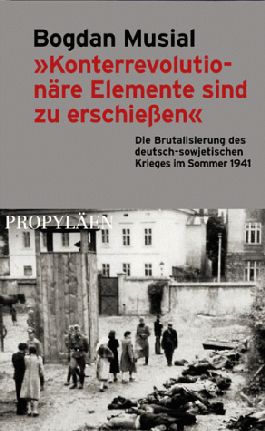 The actual subject of his new book is the Soviet policy in the Polish territories that came temporarily under Soviet occupation after the fourth division of Poland between Germany and Russia as a result of the so-called Hitler-Stalin-Pact in September 1939, as well as the reaction of the local population and of German armed forces during the German occupation after June 1941. Musial describes in detail the cruelties committed by the Soviets, which characteristically consisted of denunciations, arrests, and mass deportations to Siberia, expropriations and collectivations. Immediately after the German invasion into the Soviet Union, mass murder of inmates by the police agents of the NKVD were added. Tens of thousands, especially Ukrainian and Polish nationals, fell victim to these Soviet mass murders of inmates who could not be evacuated to the east. In Lublin alone, the capital of East Galicia, at least 4000 men and women were massacred. Furthermore, Soviet units regularly murdered German POW's, most of whom were tortured and terribly mutilated.

After the retreat of the mass murderers, these crimes were immediately blamed on the Jews, who allegedly participated in leading positions during the Soviet occupation and the NKVD massacres. In the first days of July 1941, pogroms took place in almost all parts of East Poland, which lasted sometimes for days. Immediately afterwards, execution commandos of the German Sicherheitspolizei (Security Police) and the SD (Sicherheitsdienst, security service) shot a great number of predominantly Jewish men, who had been accused of participating in the Soviet massacres. According to Musial, at least ten thousand people fell victim to these punishments for the Soviet crimes.

Bogdan Musial thoroughly analyzed the Soviet mass murders during the summer of 1941 and tried to reevaluate their significance within the anti-Jewish policy of the National Socialists. Musial tried to "put himself into the place [...], instead of judging from a superior position". An important contribution of this study is his inclusion of a multitude of mostly Polish language witness testimonies, diaries, and similar material which vividly described the atmosphere at that time from the viewpoint of the affected and the victims. Musial also included testimonies and documentary evidence from recent Polish investigations into Stalinist crimes. These sources allow a deeper understanding of the Soviet occupation between September 1939 and June 1941.

Musial has demonstrated in an excellent way how the Stalinist mass murders and the campaign of revenge and punishment unleashed by the local population, which started already during the Soviet retreat, gave an apparent credence to the abstract enemy image "Jewish Bolshevism" and furnished a legitimation to National Socialist propaganda, which Joseph Goebbels exploited exhaustively. Under the keyword "Lemberg" (Lviv), diffused hate feelings of many German soldiers and civilians solidified, namely against the Eastern Jews. Additionally, these reactions made it possible to declare the war against the Soviet Union as a necessary campaign of the West against "bolshevist barbarity".

Concerning the pogroms, Musial has three theses. First, not unsubstantial parts of the Jewish population of Soviet-Poland cooperated with the eastern regime, namely as members of the communist youth organization (Komsomol) as well as employees and collaborators of the NKVD. Therefore, the stereotype of "Jewish bolshevism" had a core of truth which supported the evolving of a conglomerate of anti-Semitism, anti-communism, and desire for revenge already long before the arrival of German troops. Therefore, secondly, the escalation of pogroms during the summer of 1941, can only be explained through the NKVD-crimes, which seemed to confirm the enemy image of the 'Jewish Commune.' Finally, the Soviet mass murders were an essential prerequisite for the "brutalization of the German-Soviet war", because Adolf Hitler gave orders to exercise extensive 'retaliations' under the impression of the Lublin massacre, so wrote Musial. This line of reasoning sees the Soviet crimes as the cause for the escalation of German violent measures and assigns a partial responsibility for this essential part to the Jewish inhabitants of Soviet occupied Poland.

By so doing, Musial puts his finger in an open wound of established historiography, because ever since the 'Holocaust' became self-evident, it is morally reprehensible to assign any kind of co-responsibility to Jews in connection with misfortune inflicted upon them.

Though Musial is correct with his thesis – one may only argue about the extent of the Jewish co-responsibility – his newest book constitutes a form of academic suicide, because with his thesis, he catapulted himself out of the congregation of the 'socially accepted' historians and made himself vulnerable to the accusation of being an anti-Semite or at least to play the game of the anti-Semites. To nobody's surprise, this was exactly the reaction of the German media.

Musial's book is a detailed study which seamlessly merges with the results of the investigations of Joachim Hoffmann, who meticulously described the terror of Stalin's Red Army and the German reaction to it. That the German soldiers had to reckon with "barbaric Asiatic fighting methods" as well as an "inhuman treatment of our [German] prisoners", as it was described in the so-called German Kommissarbefehl (Commissar Order) two weeks before the beginning of the German-Soviet war, was obvious for a long time already as a result of the experiences during the revolutionary years in Russia between 1917 and 1921 and at the latest again since the Soviet invasion of Finland and the Soviet occupation of Poland's eastern territories. Hence, in order to arrive at a conclusion as given in the Kommissarbefehl, the German Supreme Command did not have to wait for the actions of the Red Army at the beginning of war in 1941.

It is also undisputed that during the first years of the Soviet Union, Jews were the dominating leaders of the Soviet Union. To be sure, their percentage gradually declined in the Soviet Union with the years and decades, especially under Stalin, however, this initial Jewish dominance repeated itself in practically each region which was occupied by the Soviet Union, be it in Galicia, the Baltics, or later at war's end in the 'liberated' countries of Eastern Europe. Musial submits documentation for Galicia. There as well, the Jewish influence declined over the years, combined with a reduction of terror. It is therefore very well understandable that the people of Galicia and the Baltics considered the German invasion in 1941, which happened only a few years or even only months after establishment of the red, Jewish dominated terror, as an act of liberation from the Jewish-bolshevist yoke. Unfortunately, some individuals took this as an occasion to relieve their understandable anger and hatred by committing crimes against both guilty and innocent. One may condemn or regret that the German troops and occupational administrations did not always stop these activities, as it would have been morally required, or even encouraged them. However, if one can understand the anti-German cleansings in France after the Allied liberation in the year 1944, which were not less cruel – they, too, cannot be justified – one should also understand the anti-Jewish and anti-Soviet cleansings at the beginning of the German campaign. There should not be a double standard when judging both events.

What Musial does not address, however, is the question why it was exactly the Jews who were so dominant during the early years of the Soviet revolution, who had such an important share in erecting a machinery of terrorism which is unparalleled in world history, and why it was always primarily Jews who joined the Soviet revolutionaries and tyrants in masses and offered them their services. One reason for this may be the oppression which many Jews experienced for centuries in many eastern European societies, especially in Poland and Czarist Russia. Many Jews may simply have hoped for an emancipation. Not a few of them even considered the early Soviet Union to be a primary Jewish matter, as their rise from pariah to ruler, from ghetto high up to the top of the government.

A deeper analysis, however, should also research the inflexible ideological position of Torah, Talmud, and Schulchan Aruch, which defines the principle opposition of orthodox Jewry against their non-Jewish environment. The hostility against non-Jews, as it is demanded by these Jewish law books, is probably the deeper reason for eastern European anti-Judaism, for the subsequent Jewish tyranny of early Soviet domination, as well as for National Socialist anti-Judaism and anti-Bolshevism developing as a result of this. But Musial possibly neither wanted nor could bring himself to such a far reaching analysis.