Who would want to associate himself with a former Ku Klux Klan member, a convict currently sitting in a federal prison for (probably constructed) tax charges, a man described as a neo-Nazi, anti-Semite, racist? That being said, the worst that can be said about this book is said. 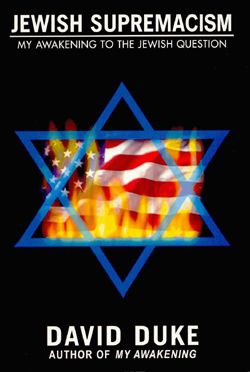 I received this book as a gift, accepting it a bit reluctantly with a strange feeling in my stomach. After a while, I started reading it, more because I had run out of other literature and got bored during my dinners than due to genuine interest. Once started, I couldn’t put it down anymore. I actually took it with me to the emergency room after I had pulled my right hamstring so badly during beach volleyball that I thought I might have a more serious injury. But the only new insight I got during my stay at the hospital was that you better not take such books with you in public unless you want to either make enemies or embarrass yourself by falsely distancing yourself from a book you actually like.

As in his first book My Awakening, this one also has a biographical style, in that Duke describes how he learned about Jewish influence in western societies, Jewish rules and laws, Jewish attitudes, and the way western society reacts to it. His story thus flows naturally and is pleasant to read.

Duke’s central thesis is that Judaism is an ideology based on the ‘racist’ assumption that Jews are superior to non-Jews, and that they try and greatly succeeded to gain decisive influence – disproportionately large as compared to their percentage of the population – over many important aspects of western societies. These claims are, of course, to be expected from a "neo-Nazi, anti-Semite…" However, Duke is smart enough to almost exclusively rely on mainstream and in particular Jewish sources to support his thesis, and as such his book is convincing to a great degree.

There are a few issues that I personally disagree with, in particular when he endorses the thesis that Jews are, indeed, a distinct race genetically considerably different from non-Jews. Although nowadays promoted by many Jews themselves, the scientific evidence to support this is, in my eyes, too meager to make such a far-reaching conclusion. Such a thesis also prevents the only possible solution that the Jewish question can possibly have, if one wants to solve it at all, that is dissolution by assimilation. It is easier to assimilate a group with merely cultural differences than one which thinks it is genetically set apart from the rest of us (whether it is true or not).

As convincing and worthwhile as Duke’s book might appear to many: A really convincing book on the Jewish question would require a book published by a David Duke together with a Jewish critic of his who is willing to confront Duke’s arguments, if he can. Such a dispute would separate Duke’s chaff from his grain, and would convince the reader that what is left over really is close to the truth. Don’t say yet it is unrealistic! There are Jews who might be willing to do this, perhaps under a pseudonym, because many Jews are appalled by the conduct of many of their mighty and influential brethren in particular and by Jewish supremacism in general. One just needs to keep looking. Because if we do not get such a dialogue, books like this one will keep preaching to the choir of those not afraid to be labeled "neo-Nazi, anti-Semite, racist…"

Everything could be done better, of course: the layout is a bit poor, and it appears that Duke quite frequently relied on second hand sources or popular literature to support his points, which he should avoid when making such controversial claims. But considering that this book was rushed to the printer shortly before Duke had to start serving his sentence, it can be expected that such flaws might be remedied in a future revised edition.