Sheldon Richman is senior editor at the Cato Institute in Washington, DC, and the author of Separating School & State, published by The Future of Freedom Foundation (FFF). This essay is reprinted from the September 1995 issue of Freedom Daily, published monthly by the FFF, 11350 Random Hills Rd., Ste. 800, Fairfax, VA 22030. 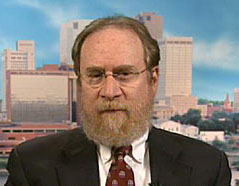 On May 11, 1940, Great Britain made a fateful decision in its approach to fighting the Second World War. On that night, 18 Whitley bombers attacked railway installations in the placid west German province of Westphalia, far from the war front. That forgotten bombing raid, which in itself was inconsequential, has been called "the first deliberate breach of the fundamental rule of civilized warfare that hostilities must only be waged against the enemy combatant forces ." (F. J. P. Veale, Advance to Barbarism [1993 edition, p. 170])

J. M. Spaight, who had been principal secretary of Britain's Air Ministry, wrote later, in his book Bombing Vindicated (1944), that "it was we who started the strategic [that is, civilian) bombing offensive" with the "splendid decision" of May 11, 1940. "It was," wrote Spaight with horrifying honesty, "as heroic, as self-sacrificing, as Russia's decision to adopt her policy of 'scorched earth'." Note that the German attack on Coventry, which is often cited as the first strategic bombing in the war between Germany and Britain, occurred six months later (on November 14, 1940). Note further that part of the British bombing strategy was apparently to provoke German attacks on England in order to stimulate support for total war against the Third Reich. As the official Air Ministry volume,The Royal Air Force, 1939-1945: The Fight at Odds (1953), stated:

If the Royal Air Force raided the Ruhr, destroying oil plants with its most accurately placed bombs and urban property with those that went astray, the outcry for retaliation against Britain might prove too strong for the German generals to resist. Indeed, Hitler himself would probably head the clamor. The attack on the Ruhr, in other words, was an informal invitation to the Luftwaffe to bomb London.

The first instance of "area" bombing, guided by a newly expanded definition of military target, occurred at Mannheim in December 1940, in which bombs were dropped on factories and the homes of factory workers. On February 14, 1942, the policy of targeting other than military sites became more explicit. With World War II now in full gear, Prime Minister Winston Churchill's British government directed the Bomber Command of the Royal Air Force to begin the destruction of German civilian morale. In other words, it was open season on cities. The decision was curious, for, as the neo-conservative Paul Johnson wrote in Modern Times (1983):

By the end of 1941, with both Russia and America in the war, the defeat of Hitler, as Churchill himself realized, was inevitable in the long run. The utilitarian rationale for attacks on cities had disappeared; the moral case had always been inadmissible.

The bombing policy was formalized in the Lindemann Plan in March 1942, when the Bomber Command was placed under the direction of Sir Arthur "Bomber" Harris, who inaugurated civilian bombing in the Middle East and India in the 1920s. Later that month, the city of Lübeck, an old Hanseatic port with no military significance, was targeted. In the words of the official report, it "burned like kindling." Half the city was destroyed.

By the summer of 1943, the United States was part of the air-terror campaign. In July of that year, British bombers attacked Hamburg, creating monstrous firestorms with temperatures of 800-1000 degrees centigrade over the city. The results: 40,000 people killed, 214,350 homes destroyed, 4,301 factories leveled, eight square miles burned. 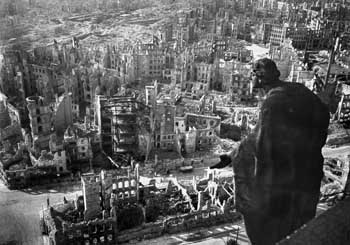 The devastation of Dresden, one of Europe's great cultural and architectural treasures, in the wake of the February 1945 firebombing is apparent in this view from City Hall tower. Some 2,000 British and American bombers took part in the attack on the undefended German city, which was packed with hundreds of thousands of women and children fleeing advancing Soviet forces.

On the night of February 13-14, 1945, what Johnson called "the greatest Anglo-American moral disaster of the war against Germany occurred." Dresden, a city of indescribable beauty and no military value whatsoever, was destroyed. In two bombing waves (the second after relief efforts were underway), fire storms over eight square miles were ignited with 650,000 incendiaries. Some 135,000 people, including children in holiday carnival costumes, were killed; 4,200 acres were turned to rubble. "For the first time in the war a target had been hit so hard that not enough able-bodied survivors were left to bury the dead," wrote Johnson. "The funeral pyres were still flaming a fortnight after the raid." Why was it attacked? As Johnson put it, "The origin of the raid was the desire of Roosevelt and Churchill at the Yalta Conference to prove to Stalin that the Allies were doing their best to assist the Russian effort on the Eastern front." German civilians were barbecued for the Bolsheviks' westward offensive.

The unspeakable evil of the Dresden bombing made even Churchill pause. He wrote to the chief of the Air Staff, Sir Charles Portal, six weeks later:

It seems to me that the moment has come when the question of bombing of German cities simply for the sake of increasing the terror, though under other pretexts, should be reviewed. The destruction of Dresden remains a serious query against the conduct of Allied bombing ... I feel the need for more precise concentration upon military objectives, such as oil and communication behind the immediate battle-zone, rather than on mere acts of terror and wanton destruction, however impressive.

(The official British history of the air offensive commented that Churchill "had forgotten [his] own recent efforts to initiate and maintain the offensive.")

It was only the beginning. In the Pacific theater, the Americans applied the British strategy of targeting civilians. Sixty-six Japanese civilian centers were hit from March to July 1945, even as the US authorities were receiving indications of a Japanese desire to surrender. The raids, involving 100,000 tons of incendiaries, destroyed 170,000 densely populated square miles. As night fell on March 9, 300 B29s laid waste to 15 square miles of Tokyo. Eightythree thousand were killed and 102,000 were injured in the firestorms. Up to roughly that point, the bombings in Japan had leveled two and a quarter million buildings; nine million people were homeless; 260,000 were dead; 412,000 were injured.

The climax came on August 6. After dropping more than 700,000 warning leaflets, the United States dropped a uranium bomb on Hiroshima. On that day and the days following, 200,000 died, burned, vaporized, suffocated. The deaths of some were evidenced only by the shadows they left on walls. Three days later, a second atomic bomb, this one powered by plutonium, was dropped on Nagasaki, 74,800 dead. Two more cities were put on the A-bomb target list, but Japan's surrender on August 14 averted the strikes. [See: M. Weber, "Was Hiroshima Necessary" ," May-June 1997 Journal.] 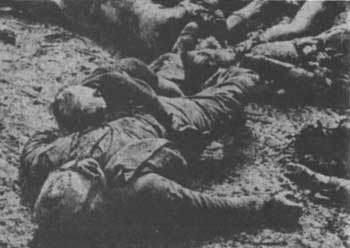 Many of the civilians who perished in the devastating American and British bombing attacks on Germany were not blasted or burned to death, but succumbed to poisonous carbon monoxide fumes caused by phosphorous bombs and the great fires set off in the firestorms. This young boy died clinging to a firefighter during the massive July 1943 British air raid against Hamburg, codenamed "Operation Gomorrah."

Thus the most destructive military conflict in human history ended. A new threshold had been crossed. The old rules of avoiding noncombatant casualties were erased. The bombing rules drafted after World War I were forgotten. The era of total war had arrived. Anyone was fair game. The murder of innocents became "collateral damage."

A sophisticated moral treatise should not be required to indict civilian bombing. Noncombatants had been ruled off-limits, because it was universally regarded as wrong to kill for the sake of sheer terror. War, though unspeakably horrific, was not to be an excuse for the dropping of all moral restraint. This made impeccable sense. The disputes between governments should not be permitted to spill onto the people forced to live under those governments. People rarely go to war. They are too busy making a living and raising their families; wars are costly. When they do go to war, they have first been whipped into a frenzy by dishonest political leaders, whose petty ambitions are often advanced by a seemingly great national purpose. The leaders rarely do the paying or the dying. They are too busy with the big picture. The details are left to the people. (See Paul Fussell's great book Wartime [1989].)

When Allied misconduct in World War II (or any war) is pointed out, many Americans become defensive, as though acknowledging government's moral lapses is bad manners, if not outright treason. That attitude is unbecoming to the political heirs of Jefferson and Madison, who understood the dangers intrinsic to the state and who grasped that eternal vigilance is the price of liberty. Those who wish not to dwell on Allied atrocities often respond that the enemy was engaged in such horrors as the rape of Nanking, the Bataan death march, the bombing of Rotterdam and Warsaw, the Holocaust. So that is what it comes down to: Dresden? Tokyo? Hiroshima? Nagasaki? They were no worse than the crimes of the Japanese imperialists and the Nazis. At that point, a plea of innocence is hard to distinguish from a plea of guilty.

“I have never, for the life of me, been able to understand the conservative. The conservative seems to me to be always clinging to the last thing which the last radical has forcibly tied him to.”
— G.K. Chesterton, 1927