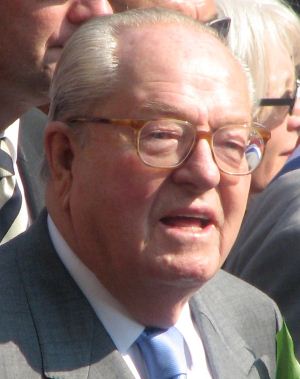 Jean-Marie Le Pen, leader of France’s National Front party stunned the world on April 21, 2002, when he came in second in the French presidential race, to challenge the incumbent Jacques Chirac. In the May 5 runoff election, Le Pen garnered 18 percent of the vote.

Press coverage of the veteran nationalist political figure has been more than unfriendly; he has been maligned with outright falsehood. It is widely claimed, for example, that he dismissed “the Holocaust” as a “detail” of history. The Los Angeles Times, Jan. 25, 1999, told readers that Le Pen “once dismissed the organized killing of six million Jews by Nazi Germany as a simple ‘detail’ of World War II.” A widely published Associated Press report of April 21, 2002, informed readers that Le Pen “is notorious for describing the Holocaust as ‘a detail’ of history.” Even the reputable BBC “World Service” has echoed this claim.

What are the facts?

On two or three occasions Le Pen has referred to Nazi “gas chambers” – not “the Holocaust” – as a “detail” or “minor point” (point de detail) of World War II. During an interview in September 1987, he said: “Do you want me to say it is a revealed truth that everyone has to believe? That it’s a moral obligation? I say there are historians who are debating these questions. I am not saying that the gas chambers did not exist. I did not see them myself. I haven’t studied the questions specially. But I believe that it is a minor point [point de detail] in the history of the Second World War.”

Le Pen was brought to trial. In France, as in several other European countries, “Holocaust denial” is a crime. After a drawn-out court battle, he was convicted and fined $200,000.

Q: Your remark nine years ago, that the gas chambers of Auschwitz are only a detail in the history of the Second World War II, has not been forgotten.

A: When you write a two thousand page history of the Second World War, the deportations and the concentration camps will take up five pages, and the gas chambers perhaps 20 lines. One must be crazy or perverse to regard that remark as disparaging.

Q: Not at all, because you give the impression of denying the uniqueness of the Holocaust.

A: Everyone sees drama from his own perspective. My father was killed by a German mine, while I lost other relatives in Allied bombing attacks. The Second World War claimed tens of millions of victims. For some the most terrible aspect of it was the deportations, while for others it was the leveling bombings or the mass deaths by starvation and cold.

Q: By comparing the genocide of the Jews with the other horrors of war, you relativize Auschwitz. In Germany this has led to a dispute among historians [Historikerstreit].

A: In the terrible tragedy of the war there was a unique fact: the deportation and murder of Jews and resistance fighters by the Nazis. But that lasted four years at the most. The much greater crimes of the Soviet Gulags occurred over decades and cost millions of lives. Millions also perished in the Chinese camps, and there have been terrible genocides in Cambodia and Vietnam. None of those crimes has received the same consideration as the annihilation of the Jews, and that is a kind of one-sidededness [Monokultur] that shocks me.

During a visit to Munich on Dec. 5, 1997, Le Pen was again asked about his 1987 remark. He replied by saying “There is nothing belittling or scornful about such a statement,” and “I have said and I repeat, at the risk of being sacrilegious, that the gas chambers are a detail of the history of the Second World War.” He added: “If you take a book of a thousand pages on the Second World War, in which 50 million people died, the concentration camps occupy two pages and the gas chambers ten or 15 lines, and that’s what one calls a detail.”

Seventeen organizations – including the Simon Wiesenthal Center and the “Movement Against Racism and for Friendship Among Peoples” – promptly responded by filing a formal legal complaint. On Dec. 26, 1997, a Paris court sentenced Le Pen for this second “detail” remark. It ordered him to pay $50,000 to publish the text of the court’s decision in a dozen French newspapers, and to pay a large amount of money to eleven of the organizations that had brought the complaint.

In a December 1997 interview Le Pen said that he would no longer speak publicly about Nazi gas chambers because nonconformist views on this subject are prohibited by law. “I won’t respond any more,” he explained. “It’s a taboo subject that is protected by legal and criminal law, and the only opinion one can express about it is that allowed by law.” (See “French Courts Punish Holocaust Apostasy,” March–April 1998 Journal of Historical Review.)

What no major newspaper or news service has bothered to mention is that Le Pen’s “detail” remark is valid. As French revisionist scholar Robert Faurisson has noted, neither Dwight Eisenhower in his 559-page World War II memoir, Crusade in Europe, nor Winston Churchill in his six-volume history, The Second World War (4,448 pages), nor Charles de Gaulle in his three volume Mémoires de guerre (2,054 pages), makes a single mention of Nazi “gas chambers,” or of a “genocide” of the Jews, or of “six million” Jewish victims of the war. (See “The Detail,” by R. Faurisson, also in the March-April 1998 Journal.)

What is “notorious” is not Le Pen’s remark about gas chambers, but rather that he was brought before a court and punished for having made it (and on the basis of an Orwellian French law), and that the media misrepresents, without censure, what he actually said.