No Peace for Rudolf Hess

In July news circled the globe that the body of Rudolf Hess, the one-time deputy to Adolf Hitler, was exhumed from a family funeral plot\. His bones were cremated and scattered at an undisclosed location at sea\. Karl-Willi Beck, the mayor of the Bavarian town of Wunsiedel where Hess was buried, justified the action by asserting that the grave had become a site of pilgrimage for neo-Nazis.[1]

Apparently Hess had requested in his will that he be buried in Wunsiedel with his parents in their family plot. At the time of his burial, the local Lutheran church, which supervises the graveyard, did not object and said the wishes of the deceased could not be ignored.[2] The removal of Hess’s body and the subsequent disposal of his corpse in a method reminiscent of the recent burial of Osama bin Laden invites a reconsideration of both his life and the death.

Rudolf Hess was born in Alexandria, Egypt on 26 April 1894. The young Hess volunteered to fight for Germany during the First World War and as early as November 1914 had taken part in trench warfare on the Somme. Hess was awarded the Iron Cross Second Class for his bravery and suffered two severe wounds during the conflict.[3] 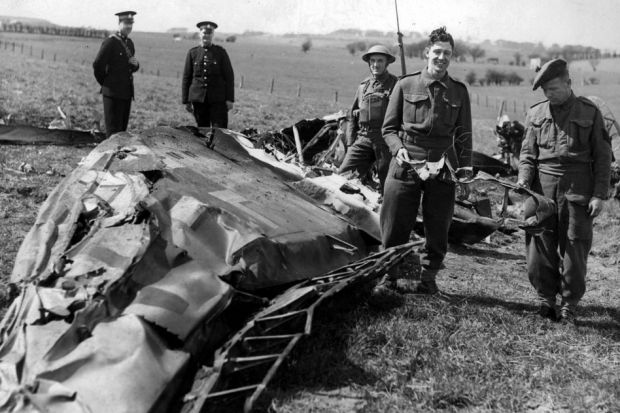 Rudolf Hess'sMesserschmitt lies in ruins along with his last ditch peace offer to the British. This work is in the public domain.

Hess was appalled by the terms of the Versailles treaty, which brought an end to the fighting. He was deeply outraged by the overrunning of Bavaria by communists in the years following the war. Hess was in the thick of the fighting when the Jewish-communist regime in Bavaria was overthrown on May 1, 1919. Shortly thereafter, Hess became member No. 16 in the National Socialist German Worker’s Party (NSDAP) in July of 1920.[4]

During the Beer Hall Putsch on 9 November 1923, Hess along with Hitler was arrested for their attempted coup. Hess was incarcerated at Landsberg prison where he edited the manuscript of Hitler’s work, Mein Kampf\. Following their release from prison, Hess became Hitler’s private secretary. As the National Socialists rose to power, so did Rudolf Hess. On 21 April 1933, Hitler appointed Hess Deputy Führer of the NSDAP. In this capacity Hess would lead the state party as Hitler’s representative. Later that year, Hess was appointed Reich Minister without Portfolio. During these years, Hess became Hitler’s closest confidant.[5]

The Second World War began in September of 1939 with the German attack on Poland\. In the months that followed the French and British declarations of war on Germany, Hitler sought on several occasions to reestablish peace.

In May 1941, Hess created an international sensation by flying his personal Messerschmitt to Britain and parachuting into Scotland in a last-ditch effort to negotiate a peace between Britain and Germany.

Whether Hitler knew of or approved Hess’s mission has been debated since the flight. A recent news story however discloses that Hitler did indeed know of and approve the mission. In a 28-page statement discovered by historian Matthias Uhl, Karlheinz Pintsch, Hess's adjutant writes that Hess's mission was to "use all means at his disposal to achieve, if not a German military alliance with England against Russia, at least the neutralization of England". It also states Hitler was fully aware of the mission.[6]

Upon his arrival in Scotland, Hess would declare that he was on ''a mission of humanity'' to offer peace terms to Britain. The British authorities in turn imprisoned him in the infamous Tower of London. Wartime British leader Winston Churchill called Hess's presentation ''a cock-and-bull story.''[7] The official position of the British Government was that Hess was speaking only for himself. Upon his incarceration by the British, Hitler and the NS government officially denounced Hess and claimed that he was a “victim of hallucinations.” It is worth noting that the British have sealed all their archival material on Hess's interrogations until 2017, and the Foreign Office has refused to reveal why.[8]

While spending most of the war in a British cell, Hess did not escape the charge of war crimes. He was brought before the International Military Tribunal at Nuremberg. Hess hardly spoke throughout the trial. He is recorded however with having said, “I don’t believe it” when shown a documentary film on the concentration camps as they were found by American troops.[9] Ultimately Hess was found guilty of “Crimes against peace” and sentenced to life imprisonment.

For the next 41 years Hess would live in Spandau prison. From 1966 until his death in 1987 he lived in a 10 x 15 foot cell under a perverse ballet of American, British, French and Soviet troops ritualistically taking turns for guarding this prisoner of peace. As Hess was the only prisoner left at Spandau, the cost of keeping Hess in prison was estimated at more than $840,000 per year.[10]

On August 17, 1987 when Hess was 93, it was claimed that he committed suicide\. Several authors including his son, Wolf–Rüdiger Hess, have asserted that Hess was in fact murdered in Spandau prison. Certainly it was odd that after all these years Hess would kill himself. Earlier, in 1987, Hess was still seeking his release from Spandau\. Hess was apparently unable to raise his arms above his shoulders, making it particularly difficult to hang himself. One guard is alleged to have admitted that the entire tale of suicide was “perfectly set up.” In his prison diary, Hess requested various supplies on the morning of his alleged suicide – a strange request for someone planning to kill himself.[11]

Hess was recorded as saying that if he had his life to live over again, “I believe I would travel the same route and end up here in Spandau Prison. I would not have wanted to miss the opportunity of serving under Adolf Hitler as his deputy.”[12]

There is little doubt that Hess’s service to Hitler and to National Socialism endeared him to the far right. It is also true that this unwavering support of the National Socialist cause resulted in his lifetime in prison, his possible murder at Spandau prison and ultimately the violation of his grave.

Today Vladimir Lenin rests as he has since 1924 in Red Square in the center of Moscow\. Joseph Stalin had his grave moved during the Khrushchev years but still rests in a marked grave near the Kremlin wall. Mao Tse-Tung rests in a mausoleum in Tiananmen Square in Beijing. Napoleon’s remains rest under the dome of Les Invalides in Paris. Clearly the number of victims is of no concern when it is determined who shall rest in peace and who shall not. The final irony in the story of Rudolf Hess is that he was unable to find peace even in death.