SALON: A Journal of Aesthetics

SALON is a small independent periodical published out of Fort Collins, Colorado. It's edited by a very independent and thoughtful lady named Pat Hartman. Each issue is devoted to one theme. One day recently out of the blue, I received issue #22 of SALON by post. Its theme is Freedom of Expression, and most of the material is on Holocaust revisionism. She gives a lot of space to David Cole, and she quotes liberally and fairly from some of my stuff.

As I wrote to Hartman, while the materials on revisionism are full of holes due to the lack of expertise of those who put it together, it is nevertheless the most thoughtful, fair-minded, interesting, provocative and thorough look at the issues raised by the revisionist controversy that has been published in any "alternative" press periodical, and as a matter of fact in any periodical whatever. Nothing published in the student press at even the greatest universities comes anywhere close to stating, as SALON has, what the real issues are. 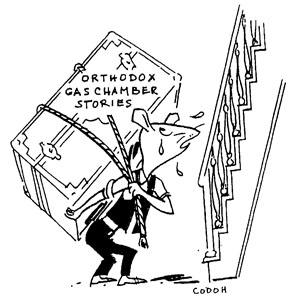 All he has to do is lay it down.

David Cole gave Hartman a lot of tune last summer when she was putting this issue of SALON together, and he's not as happy with it as I am. Unlike myself, David gets impatient with intellectual sloppiness. Another weakness of his is that he appears to be unable to develop a taste for being slandered. I've counciled him a number of times to try to get with the program but he can't seem to turn this one around.

Articles in this issue of SALON include "Taboos, Thoughtcrime, and Sacred Cows," "Where the Editor is At," "Some Thoughts from David Cole," "Reinventing History: Better Living Through Incredulity," "The Epistemological Implications of the Thing," "Comments" by Ace Backwords, "The Players," "What's in it for Revisionists?," "(Censorship) Highlights from Various Nations," "Evidence," "It's All a Numbers Racket," "Read Their Lips: No Gas Chambers," "Eyewitness is Just a Ten-Letter Word," "The Inferno," "The Museum: Other Takes," "No Anti-Semitism Here," "It's All a Lie," "Tu Quoque," "The Poor Misunderstood Nazis," and so on. There's plenty more.

There are 200 signed and numbered copies and I suppose several hundred unnumbered copies. Many copies will go to editors of other alternative publications where SALON will be reviewed and discussed. Any young independent reader who goes through this issue of SALON is going to be left, in all likelihood for the first time, with many provocative questions about The Controversy.