Since the start of the Al Aqsa Intifada in September 2000, the Israeli economy has increasingly suffered not only through the direct cost of the suppression of rock-hurling Palestinian children, and the increasing cost of keeping the Jewish settlements in the occupied West Bank protected, but also through the loss of billions of dollars in tourism, and investment revenue.

In addition, immigration to the Jewish homeland dropped by nearly a third last year. While Barak's and Sharon's suppression of the uprising has been generously supplemented through the largess of American Congressmen who keep the Zionist tap on the U.S. Treasury open, much of this money is eaten by unproductive weapons hardware, and the economic dead loss of military, and police expenditures. While tanks, fighter planes, and soldiers make for an entertaining parade, they contribute nothing to the wealth of a country. The military is, in fact, entirely overhead. 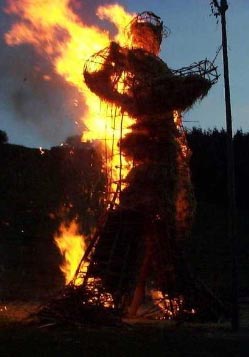 The defunct Soviet Union met its demise, in part, due to it becoming militarily top-heavy. Like the proverbial white elephant, the military that kept the communists on their perch also ate the tree out from under them. Likewise, despite the hundreds of billions of U.S. dollars the Israelis have spent on their premier defense force, a professor of history at the Hebrew University of Jerusalem recently asserted that the Israeli army is "99 per cent irrelevant" in the current conflict with the Palestinians. It has long been observed that countries spend a lot of money preparing for the last war. Israel has made the same mistake — undoubtedly with the encouragement of American weapons manufacturers.

Like in the old Worker's Paradise, the bulk of Zionism's military is now relegated to police functions in the West Bank and Gaza. The Israeli Defense Force is there to enforce their government's coercive policy toward the occupied territories. This policy appears to have four goals that the Zionists hope will ensure Israel's survival. These goals are to control the Palestinian population so that it can be a source of cheap labor, as well as the fresh water aquifers under the occupied territories that provides Israel with 40% of its fresh water. Simultaneously, the Israelis wish to prevent the assimilation of the expanding Palestinian population since their inclusion would dilute, or eliminate, the Jewish majority – a poison pill for Israel as a Jewish state, and avoid paying restitution to the refugees who would undoubtedly agitate for compensation after becoming citizens of either Israel or an independent Palestinian state.

As Palestinian resistance to Israeli policies increases, the expense of enforcing them also increases. The recent military invasion by the Israeli army is focused on destroying Palestinian infrastructure, including their airport, water systems, and mass communications facilities, along with the removal of the Palestinian leadership with the intent of making the Palestinians even more dependent on Israel economically while, at the same time, making them incapable of mounting organized resistance to the occupation. This would amount to the enslavement of the people of Palestine.

In making Arafat into the personification of terror, and endorsing his removal from the scene, his Zionist detractors are reviving a custom of superstitious societies called sympathetic magic.

Examples of sympathetic magic are common. The quote from the Gnostic Gospel of Thomas above is an example of a form called sympathetic eating where the consumer hopes to take on characteristics of the consumed. In chapter 16 of the Old Testament book of Leviticus, the High Priests put the sins of Israel upon the head of a goat then send it into desert exile. The general idea is that a physical representation of a problem beyond someone's control is found or fashioned. Then an action, involving the symbol, imitating the goal desired, is performed. Burning an effigy. Sticking a pin into a voodoo doll. Killing the corn king to guarantee a good harvest. These are all examples of sympathetic magic rituals. In the case of Arafat, he is supposed to represent terrorism, i.e. Palestinian resistance to Israeli domination, and his removal will end terrorism. It sounds easy. It also will not work.

Of course, exiling Arafat will not end Palestinian resistance. The Likudniks want to eliminate all internationally recognized Palestinian representation in order to silence it, while forcibly pacifying the West Bank. While Chairman and accused war criminal Arafat is being imprisoned by Prime Minister and accused war criminal Sharon, Israel's enemies continue to multiply. It is impossible to keep weapons out of prisons, or off airplanes, and the Israelis will not be able to keep them out of the hands of the Palestinians who have demonstrated that they are willing to resort to throwing rocks if nothing else is available.

Nor does it look likely that Arafat will be exiled since the U.S. continues to recognize him as the legitimate leader of the Palestinian people. Although Zionist bootlicks denounce all criticism of Israel, the simple truth is the Palestinians are blowing themselves to bits among the Israelis for reasons other than jealousy. This sort of hate is not learned from textbooks. It isn't learned though attending religious services. It will only be learned through the constant reinforcement of living among Israelis on a daily basis. If this were not the case, the contradiction of personal experience would neutralize such teachings.

At this point, Israel has few options. The peace process has always been, for the Israelis, a stalling tactic. As they built settlements in the occupied territories, the Israelis felt that the annexation of Palestine was just a matter of time and time was on their side. The Palestinians, however, have lost their patience and a good part of their fear. Time is no longer on Israel's side. What they have to look forward to is a long, expensive guerilla war now that the pantomime peace process is dead.

Israel has always been a charity case and coercive relationships are expensive as well as stressful. The expense of policing the Palestinians will only increase as Israel's international trade and tourist income will only drop resulting in even more dependence on foreign aid from the United States government. Asserting and pleading for "Israel's right to exist," the Zionist lobby's grip on the Congress will only tighten to squeeze even more money from the over-taxed.

The fact of the matter is countries do not have rights. People have rights. Does the Ottoman Empire have a right to exist? How about Czechoslovakia? A country is an expression of the collective will of the people who live in it. Rights are loaned to the state by its citizens for the purpose of collective representation domestically and internationally. While Jews have the right to self-determination, so do Palestinians. Zionists will tell you there has never been a Palestinian state. This is a false argument. At one time there was no Israel either. People have a right a government that represents their wishes. Governments serve the people they represent, not the other way around. People have the right to fight governments that oppress rather than represent them. Check the American Declaration of Independence to verify of this concept.

The right to exist means, for Israel, the right to steal because Israel has never been self-sufficient. As long as Israel remains in a coercive relationship with the Palestinians, Israel will always be a deadbeat country because the cost of maintaining Israel is rising at a rate faster than its economy is growing.

For Americans and those who work to enable Israel to maintain its suppression of Palestinian rights, it must be kept in mind that the costs are more than just the cost of the weapons shipped to that country every year for over five decades with the blessing of Washington, D.C. There are hidden costs in international relations and the rising costs of security at home. American weapons given to Israel make targets of Americans. Don't be fooled. There are countries that are just as free as the U.S.A., and just as rich. Yet, nobody is exploding bombs around their embassies out of jealousy. Nobody is attacking their ships. Nor are airplanes smashing into buildings anywhere else due to fits of jealous rage or irrational hatred.

The United States government must face facts. Israel is doomed. It is time the Congress end one more failed government welfare program and stop throwing good money after bad.