A reader of my summer 2016 article in Inconvenient History, “How the Allies Launched the Holocaust at Casablanca in 1943” opined sophomorically that, in view of subsequent events, how much grief and destruction the Germans might have spared themselves if they had, as was there and then demanded of them, just thrown down their arms and surrendered unconditionally to the Allies. After all, they ended up unconditionally surrendering anyway after having needlessly gotten themselves bombed back to the Stone Age in the process. 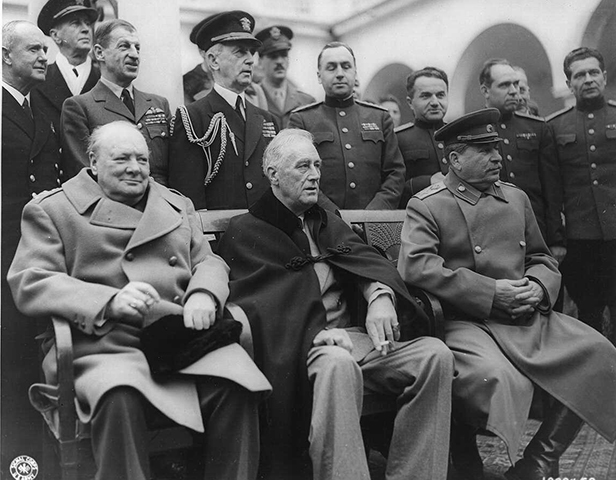 Ah, hindsight. Let’s set aside the obvious rejoinder that neither the Germans nor the Allies had access in 1943 to the wisdom my interlocutor (and all the rest of us) now commands. But don’t throw the baby out with the bathwater; let’s retain the precious knowledge we all gained at such terrific cost in our (and their) parents’ and grandparents’ blood. Let’s factor in subsequent events as we all know them.

While the Germans obviously might have done the sensible thing after hearing that they must unconditionally surrender (and realizing that the Allies would in fact pursue this outcome to realization, and would have the means to do so), let us put the shoe on the other foot. Leaving the Germans in the darkness that everyone in fact was in at the time, let us imagine that the horrific history we all know now somehow, through a truly divine intervention, was implanted in the minds of Churchill, Roosevelt and Stalin (leave their hapless legions and constituencies in the dark, as they surely would have mutinied if possessed of the hypothesized divine foresight).

Let’s also imagine that Churchill and Roosevelt were the wise, benign rulers they are presented to their subjects’ grandchildren as (Stalin’s are, too, sporadically) rather than the bloodthirsty megalomaniacs they all clearly were. As they survey in their god-enlightened minds the ghastly consequences of the pronouncements they made in actual history, what might occur to them as forefendments of them? Might either, or both, of them start by jettisoning the “unconditional surrender” mantra they perpetrated in real life? Having done that, might they further, to preserve the lives and property of not only their own sweating, shooting, bombing, dying subjects, but even those of their targets, those Germans, say something like, “We’ve received repeated peace proposals from Chancellor Hitler and to show openness to his desire for peace, we’re going to start by releasing Rudolf Hess from the dungeon we’ve been keeping him in in London, and we’ll pursue German withdrawal (which has been offered) from western Europe. We also earnestly counsel Comrade Stalin to pursue, entirely on his own (aid from our side ceases herewith), cease-fire lines with the German forces that have invaded the country whose government he leads.”

What a fairy tale! Just contemplating it should reveal to the inquiring mind the drive the Allies (eastern, western, even American) had to conquer that nasty country in the center of Europe, and damn how many lives, German and of their own hapless citizens, that might cost, to say nothing of the staggering material destruction involved.

Our world (yours, mine, the Germans’, the Russians’) would be very different today if they had done any such thing.

But such things are not done by those whose power, and Satanic gratification, is bolstered by war, war, and more war.

Keep that in mind as you choose whom to support in your “democracy”—if, indeed, you have the luxury to support anyone who might abjure these (a luxury not present in the US presidential election of 2016, or of 1940, or …). Government, and the simulacra of “democracy” it continually suckers us with, leave little chance of that. Theirs, yours, mine.