We examined the memoir of Erika Kounio earlier. This time is the turn of her brother, Heinz Kounio, who also wrote a memoir: A Liter of Soup and Sixty Grams of Bread: The Diary of Prisoner Number 109565 (first published in Greek in 1981 under the title I Lived Death and later in English and German). 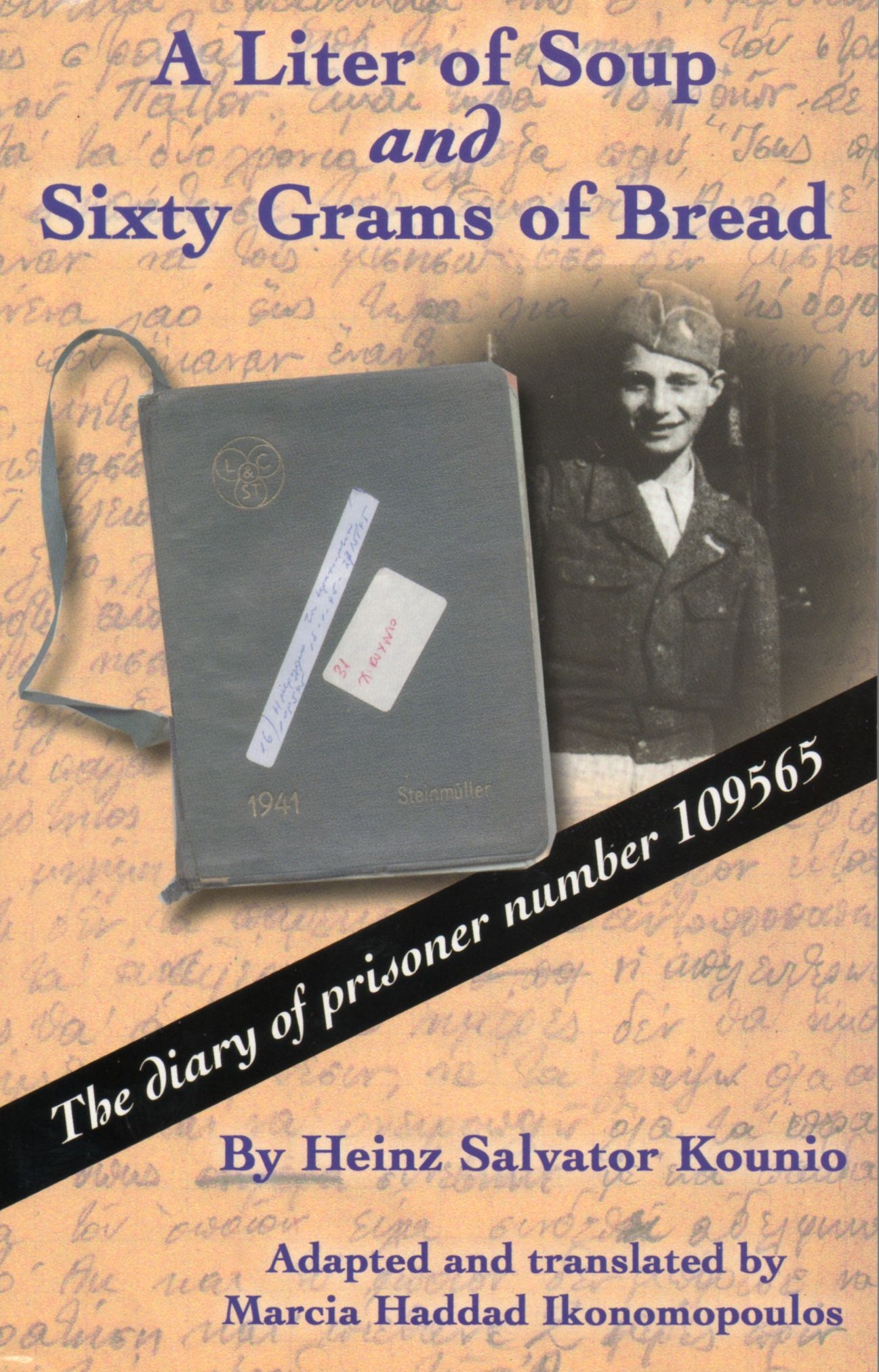 Kounio was deported to Auschwitz on March 20, 1943 at the age of 15. He and his father were sent to work at the tailor shop where they stayed until the evacuation in January 1945. Afterwards he was sent to Mauthausen, then Melk, and finally Ebensee, where he was liberated by the Americans on May 6, 1945. While at Melk he started keeping a diary which served as the basis for his book.

Kounio’s experience is typical of most Holocaust survivors: Hard work, illness, beatings, anguish and extreme hunger. But what does he have to say about the extermination story?

As usual, after arriving at the camp, it wasn’t long before Kounio heard rumors about the mass killings:

“From the very beginning we had asked ourselves what was this concentration camp. Would we see our loved ones again? They had been so abruptly taken from us. We had not even had the chance to say good-bye. We had heard that they had been killed, that there were crematories where the corpses were burned, but we did not want to believe such rumors. We thought that these stories were just another means of terrifying us. However, these rumors were true!” (p. 17)

Yet he does not explain how he verified that the rumors were true. He limits himself to adding:

“The transports from Greece arrived one after the other. Every third day, or once a week, we learned of a new transport, and of how many had been burned and how many new arrivals entered the camp.” (ibid.)

Not a Day without a Selection

Like the rest of the witnesses, Kounio claims that a selection’s purpose was to decide who would live and who would die:

“What did this traumatic word mean? In order to understand, you must realize that each day a new transport arrived, with new arrivals entering the camp. They were brought there from all parts of Europe. From each dispatch, only 10% were selected to live. The rest were destined for the crematories.” (p. 20)

And like the rest of the witnesses, he had no way of confirming this. However, he gives an interesting piece of information regarding the hospital selections:

“The women also had to pass naked in front of the Doctor. He examined them with the same indifference as he did the men. Many times, even if an inmate did not show any signs of weakness, he still fell victim to the malevolent doctor. Both men and women were led to the crematories, even though they showed no signs of defect.” (p. 22)

But if they showed no signs of defect, wasn’t it possible that they were really sent somewhere else? After all, if you kill those unfit for work, why do you need a hospital in the first place?

By the way, here’s Kounio’s own experience:

“I personally survived seven selections. During the last one I was so weak. I was overcome by fear. Only my faith in God helped me to survive.” (ibid.)

Kounio gives quite a few details on the crematories and their function (pp. 34-37). So let’s see how the cremations that they “learned” about every third day were done.

“The crematories were constructed with the express purpose of preventing any delay in the extermination of as many Jews as possible. It was here that the corpses of the prisoners were burned. The prisoners were sent to their death in large groups inside the same buildings that housed the crematories. They were killed by poisonous gas. The gas used was Zyklon. It was preferred because it would spread quickly into the air and kill with great speed. Within 10 minutes there was no sign of life.”

However, the characteristic of Zyklon B was its slow evaporation. It was certainly not a gas that could be described as spreading quickly.

“Each crematory was housed in a building containing three floors. On the lowest level there were two large rooms internally connected by a metal door. In the first room there was a large cabinet filled with soap. Alongside there were about 150 showers, one foot apart. It was the infamous gas chamber. No one ever came out of there alive, nor did you ever hear of anyone being rescued by a miracle. At the far end of the hallway there was a moveable door that led to a lift, connecting it to the floor above.”

This description fits partially with Crematoriums II-III (Kounio seems to ignore that the rest were of a different design). In the basement there were actually four rooms forming a Γ shape: Morgue #1 (the alleged gas chamber), Morgue #2 (the alleged undressing room), Morgue #3 (later subdivided into smaller office and utility rooms), and a hallway connecting them all with the elevator leading upstairs.[1] Also, Kounio places a cabinet with soaps in the gas chamber, not mentioned by any other witness.

Needless to say, these numbers have nothing to do with reality. All four Birkenau crematoria had 46 muffles in total, although they were never all operable at any one time. These muffles could cremate one corpse per hour, hence all muffles together could theoretically dispose of a maximum of about 1,000 corpses a day, hence a tenth of what Kounio claims.[2] And that is not all. Describing the deportation of the Hungarian Jews in late spring/early summer 1944, Kounio gives even more outrageous numbers:

“During the spring and summer of 1944, when the Jews of Hungary, France and Belgium were being annihilated in mass, the crematories worked at full capacity. The furnaces alone were insufficient to burn such a large quantity of people. There were 100’s of thousands who were gassed to death, and the Germans forced prisoners to dig large holes alongside the crematories. This is where the leftover corpses were burned. Many times they actually threw live babies into the pyres! During this time, the number of burned corpses rose to 25,000 a day. This lasted until the end of the summer of 1944. After this operation was completed, they concealed the pits. The number of burned corpses never went lower than 5,000 a day. In this way, more than 1,500,000 human beings disappeared in the crematories of Auschwitz, and this was only one of the concentration camps.”

Air photos taken during that time, however, show no trace of these gigantic pyres.[3]

“In the adjacent chamber were the so-called ’baths.’ Here, up to 1,500 people were crammed together in a suffocating environment. They were placed under the ‘shower,’ and were told to prepare themselves for a bath. From the moment that the heavy metal door closed, their death was only minutes away. For those of us who were outside, it seemed like an eternity. The gas pellets were in a container that was screwed into a hole in the middle of the ceiling. When the door was closed, they unscrewed the cap and opened the gas container. Small blue stones began to fall from the container. The gas, called ’Zyklon,’ began to spread rapidly into the air.”

This description is totally at odds with the orthodox narrative. The Zyklon-B pellets were supposedly poured from opened cans through holes in the roof (Crematoria II + III) or the walls (Crematoria IV + V). The cans were in no way “screwed” into the ceiling. After all, had this been the case, how could they have unscrewed the can’s cap from the outside?

“After 10 minutes had passed, the SS officers, who had been observing from a small window in the door, opened the door. Wearing gas masks, they quickly opened the vents in order to remove the gas.”

It’s clear that Kounio has no idea how a gas chamber works, real or imaginary. Any indispensable, efficient gas-chamber ventilation would have been mechanical in nature. To start it, no vents had to be opened, only electric motors had to be switched on. And any execution gas chamber would have had to be ventilated out a long time before any door could have been opened safely. Even in case of the ground-floor rooms of Crematoria IV + V that purportedly served as homicidal gas chambers, their wall openings allegedly used to both throw in Zyklon B and to ventilate the rooms afterwards were closed with wooden shutters that were operated from the outside.

The makeshift freight elevator in Crematorium II was actually rather small and had a permissible maximum load of just 300 kg, or 5 to 6 corpses. In Crematorium II, an elevator with a higher maximum load may have been installed, but even that could not carry more than maybe 20 corpses at a time.[4] 50 corpses is a totally imaginary number.

But Kounio is not done. As he informs us, the Nazis used also other types of extermination:

“If the number of condemned prisoners was small in number, they did not kill them with gas. First, the prisoners had to strip naked and were placed in a chamber. One of the members of the Sonderkommando lined them up one behind the other. Another Sonderkommando then took each one by the ear and led him to another chamber. An SS officer was hiding behind the door. He shot each one in the temple. The pistol had a silencer on it. When the condemned prisoner fell, two other inmates would transport him to the lift. If the number of condemned prisoners were extremely small, the Germans did not use gas or a pistol to kill them. They would burn them alive, throwing them into the fire.”

And this brings us to the most important question: How did Kounio know all this? He worked as a tailor in Auschwitz and never even set foot in Birkenau. Who provided him with that information? A member of the Sonderkommando? Probably not, because not only the information is wrong, but he also states:

“It is not easy to describe the work that the Sonderkommando did. Only those who survived this hell would be able to tell us. On the other hand, what would someone actually remember, after having survived this unheard of, unimaginable hell?”

That leaves other prisoners as the possible source. But who exactly? He does not say. Only later when he describes two uprisings at the camp he writes that the narrative comes from a “personal acquaintance” working in the crematories who survived and conveyed the information to him (p. 66). And again, the information is wrong, as he claims that during the Sonderkommando revolt of October 7, 1944, Crematoria II and III were set on fire, when in fact it was Crematorium IV. So we have wrong information from an unknown source. And that’s all there is to it.

After the Epilogue, Kounio explains the reasons for writing his book as follows:

“This book was published after many years of silence. It was published after I went back and revisited those Nazi concentration camps where I had been a prisoner. I decided to publish this book for three reasons: my personal response to Holocaust denial, out of respect for the memory of those that did not survive, and in response to my children’s pleas.” (p. 167)

“I am not a historian, and there is no way that I can relate everything that happened during these years. I can only relate what I myself experienced.” (p. 168)

And yet his book has plenty of things that he most certainly did not experience, things which are all wrong, and he does not even try to back them up. That neither helps his credibility nor his response to Holocaust denial. It just makes it worse.