The Great Holocaust Trial: The Landmark Battle for the Right to Doubt the West's Most Sacred Relic, Twenty-Fifth Anniversary Edition 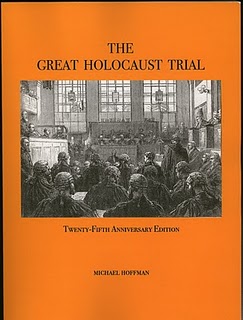 Sometimes it is easy for us to forget that, in the quite recent past, Holocaust revisionism was a thriving movement that exacted some pretty impressive concessions from mainstream historians. The 1970s and 80s witnessed the rise of revisionism as a vigorous network of activists from all walks of life, complete with filmmakers, military personnel, dramatists, clergymen, journalists, and university professors. During this period, revisionists succeeded in forcing mainstream Holocausters to distance themselves from many of their more ludicrous claims. Yet during the past fifteen or so years, revisionism has gone from being an exciting and formidable movement to a scattered, quiet, and frequently depressing jumble of independent publishing ventures that commands scant public attention.

If you ask veteran revisionists what led to this radical change of affairs, some would surely cite the retirement of Ernst Zündel. Since the later 1990s, when Ernst Zündel declared victory in the Holocaust battle and decided to devote his talents to matters less heretical, things have never been quite the same. Though we’ve had several successes since Zündel’s departure, the worldwide revisionist movement has undeniably lost a certain spark since his departure. By chronicling the charisma and creativity that Zündel showed during his long fight for historical truth, Michael Hoffman’s book—which has been updated to commemorate the twenty-fifth anniversary of Zündel’s 1985 False News trial—provides a valuable glimpse into why it was so important for the Holocausters to muzzle this eccentric German-Canadian artist who had galvanized and electrified a movement.

The title of Hoffman’s book, then, is somewhat misleading. Although The Great Holocaust Trial does give an account of Zündel’s false news trials of ’85 and ’88, this is a book about Ernst Zündel and his decades-long struggle to defang the Holocaust golem. Hoffman begins by recounting Zündel’s birth and early life in the Black Forest—a region, as Hoffman is quick to point out, that has a long tradition of producing “indomitable warriors” that have repeatedly resisted the clutches of imperialism. Yet the Germans, who more than 2,000 years ago were able to beat back the world’s most formidable empire, seem to have little luck with the psychological brand of warfare that is waged so beautifully by the empires of today. Contemporary Germans, Hoffman suggests, worship their defeat and their bottomless guilt because they are a colonized people living in an occupied land. Thus as Hoffman points out, it is especially stupid for people to dismiss revisionism on the grounds that “the Germans” themselves vigorously protect the orthodox Holocaust narrative. Those who recite this cliché must pretend “as if the current crew of opportunists, whores, and nincompoops ruling Germany from the barrel of U.S. Occupation troops’ guns are somehow the legitimate spokesmen of the German people. They forget that the Communists and Zionists won the war and have imposed their political, military, academic, and journalistic worldview on the colonized Germans ever since” (29).

In 1957 Zündel left his conquered fatherland for Canada, where he and other German immigrants were subjected to a steady stream of anti-German propaganda about gas chambers, darkening heavens, willing executioners, and their bewildering complicity in the naughtiest crime the world has ever known. Right after Zündel stepped off the boat, he seems to have stepped into his ancestors’ jackboots in order to fend off the Holocausters’ virulent regime of “truth.” After handing out leaflets and giving lectures for several years, Zündel threw together a shoestring campaign for the leadership of Canada’s powerful Liberal Party. And though he was outspent by establishment gofers who easily won the election, Zündel came away with a different sort of victory: not only did he inject his name into virtually all Canadian households, but he also won the respect of the country’s German immigrants and anti-Communists.

But as Hoffman tells us: if you find yourself in good favor with German immigrants and anti-Communists, you’re certain to make some pretty powerful (and predictable) enemies. The Holocaust “survivor,” Sabina Citron, was among the boldest of these enemies. In a twist of irony that never seems to grow old, Ms. Citron incited much hatred upon herself and other Holocaust survivors by demanding that Zündel be prosecuted for incitement to racial hatred. Thus to save Citron from another Holocaust—this time wrought not by Europe’s largest and most technologically advanced state, but by hard-hatted Zündel and his tiny network of artists and auto-workers—Canada imprisoned and tried Zündel for publishing “false news,” whatever that is.

Hoffman’s humorous courtside account is filled with many bizarre persecution fantasies, which when taken together seem like a B-movie co-produced by Walt Disney, David Lynch, and Charles Manson. Hoffman cites one particularly creative “eyewitness,” Arnold Friedman, who claimed that “while in Auschwitz he saw ‘fourteen foot flames’ shooting out of the crematorium chimneys. He also gave sworn testimony that he was able to tell whether the Nazis were burning fat Jewish Hungarians or skinny Jewish poles by looking at the different colors of the smoke and flames coming out of the crematorium.” Another “eyewitness” Morris Hubert, a former inmate at Buchenwald, claimed that, “In the (Buchenwald) camp there was a cage with a bear and an eagle. Every day they would throw a Jew in there. The bear would tear him apart and the eagle would pick his bones.”

This embarrassing kind of eyewitness testimony was not at all what Sabina Citron had in mind. As Hoffman writes, “Now the Jewish lobby was getting panicky. Their entire cult was being revealed for the cheap media hoax that it was: A fraud built on ‘testimonies’ and ‘confessions’ and movies, books and articles based on the confessions and the testimonies.” Although the Holocausters thought they would have a quick, effortless victory against the dissident publisher and his demonic legion of hate, the trial became uglier and uglier for Citron and Co. as the weeks dragged on. In fact, Hoffman shows that, during Zündel’s 1988 appeal trial, not a single Holocaust survivor agreed to take the stand for the prosecution. They, along with the prosecution’s premier expert, Holocaust historian Raul Hilberg, refused to be re-interrogated about what we all know is “the best-documented event in history.”

As we all know, Zündel was convicted in both trials, but in 1992 the false news laws under which he was prosecuted were overturned by the Supreme Court of Canada. A few years later, Zündel moved to Tennessee with his wife, US citizen Ingrid Rimland, only to be kidnapped on erroneous immigration charges in 2003 and hustled into Canada. After sitting in solitary confinement for two years, Zündel was packed off to Germany where he was again tried and imprisoned for publishing texts that threatened the insecure regimes of America and Canada as well as Germany. At the end of his book, Hoffman traces all of these circumstances in detail in a handy timeline of revisionism during the 1990s and 2000s. Readers can finish the book, then, by tracing the reverberations of Zündel’s sacrifice for historical truth.

I highly recommend Hoffman’s book, because it offers an honest and balanced account of the tragedy of Ernst Zündel. Hoffman faults Zündel for several things, including his stubbornly outspoken Hitlerism, while nevertheless portraying Zündel as a generous, courageous, and highly talented leader. Also useful about the Great Holocaust Trial are the new appendices, which include essays by Hoffman, Fred Leuchter, and Zündel himself. All in all, Hoffman’s book is a valuable contribution to a distinct and important kind of revisionism—a highly personal literature by revisionists about revisionists—that puts a human face on a community that has for too long suffered under the shameless squawking of Commissarettes like Sabina Citron.